“Earth Day may be the turning point in American history.” 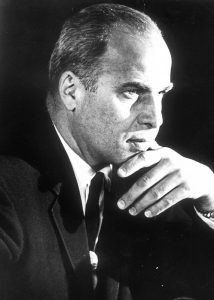 Former governor of Wisconsin (1958-62) and U.S. Senator (1963-80), Nelson has been chairman of the Wilderness Society since 1981. As governor and state legislator, Nelson was a strong supporter and innovator in conservation programs. While in the U.S. Senate he founded Earth Day and Earth Week and authored or coauthored bills creating the Environmental Education Act, the Apostle Island National Lakeshore, and the Lower St. Croix Wild and Scenic River.

The first Earth Day in America came in 1970. It was a time when this country was facing up to some of its major challenges, and pollution of the environment was one. Gaylord Nelson, the junior U.S. senator from Wisconsin, led the effort to establish Earth Day and Earth Week. They would be marked around the country with activities in our schools and communities, raising awareness about the need for a healthy environment.

If Gaylord Nelson had done nothing else, that would have been plenty. But Nelson had already established a strong environmental track record by 1970, and he went forward to continue his work long after most people would have passed the torch and taken a seat on the porch.

Born in Clear Lake, Nelson served in the State Senate for 10 years and was elected governor in 1958, serving two terms. Then it was on to the U.S. Senate, where he served from 1963-80. All along the way, Nelson was working diligently for the Earth and all its living creatures. In Wisconsin, he initiated the Outdoor Recreation Act Program in 1961. That program helped secure more than 1 million acres of land for recreation and preservation. He made the Forest Crop Law permanent, and broadened its mission to address needs of fish and wildlife, in addition to timber production.

Earth Day and Earth Week are reminders of his accomplishments in Washington, but his impact was felt in other key areas. He authored laws that protected America’s finest wild and scenic rivers, including the St. Croix and Namekagon back home. He wrote the bill that banned the pesticide DDT and the use of phosphates in laundry detergents. He authored or co-authored new, stronger federal laws on air and water pollution and toxic substances in the 1960s and 1970s. He wrote the bill that created the Environmental Education Act, assuring that generations of children in America would learn the importance of protecting the environment. After leaving Congress, Nelson remained active in environmental matters, serving as a counselor to the Wilderness Society.

Politics is often described as being shortsighted, and politicians are accused of thinking only about the next election. Gaylord Nelson rose above that. His legislative legacy and leadership on environmental matters, both in Wisconsin and across the nation, will stand the test of time because they have such an important and lasting impact. Wisconsin and the nation can be thankful for the deeds of Gaylord Nelson.

“Gaylord Nelson” by Harold Jackson of The Guardian – Environment