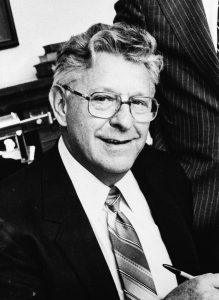 A blend of scientist, teacher, scholar, and activist (he was also an accomplished musician), Becker left a rich legacy.

Born in 1917 in Milwaukee, he studied both the sciences and languages, served in the Army Signal Corps in World War II and taught and worked in administration at several Wisconsin high schools. George died in November, 2002.

In 1957, he joined the biology faculty at the state college in Stevens Point, now the University of Wisconsin-Stevens Point. He remained on the faculty for more than two decades and earned numerous accolades, including professor emeritus status. He was the university’s chief expert on fishes. Work on “Fishes of Wisconsin” began almost immediately upon his arrival in Stevens Point. There was no research money available, so the effort became a family affair, with wife Sylvia and sons Kenneth, Dale and David joining him on fish seining outings across the state.

Writing of the book took three years, and the result was a work that detailed the status, distribution, habitat and biology of the state’s fish species. He enlivened it with anecdotes and even a few fishing tips – overcoming the objections of the publisher – making it readable for fishers and scholars.

His scientific accomplishments also included development of a system to pinpoint the age and growth of fish by concentrating on grown rings in scales.

Becker was among the first to demand action to clean up the Wisconsin River, which was polluted by industrial and municipal dischargers. He took up the cause in the 1960s, when politicians, civic and business leaders opposed it as too costly. “We could see the decline in water quality during the fifties and sixties,” Becker wrote in an essay. “The river was brown and lacked its former clarity. It had a terrible odor. Massive fish kills were occurring, including a remnant sturgeon population. We were turning the river into a sewer, and I knew something had to be done.”

As president of the Citizens Natural Resources Association of Wisconsin (CNRA) from 1972-74, he interested fellow members in the issue, leading to creation of the Wisconsin River Restoration Committee, which he chaired. He proposed a sanitary authority for the entire river valley, including miles of pipes to haul polluted water to a sewage plant and return clean water to the river. He was mocked for proposing an effort of this scale, but continued to lobby for river cleanup. George remained an active member of CNRA until the late 1990s.

The Restoration Committee raised funds to advocate for cleanup, testified at hearings, submitted numerous resolutions and petitions to various branches of government and published a report asking the U.S. attorney for the western district of Wisconsin to take action against polluters.

The federal Clean Water Act of 1972 spurred river cleanup, and Becker later wrote, “…everybody I talk to now says the Wisconsin River is in its best shape in memory.”

Becker tangled with the DNR over another water-related issue. He was an outspoken opponent of the agency’s plan to chemically treat the Tomorrow-Waupaca River basin to eliminate rough fish and improve conditions for trout. He contended it was too drastic a solution and would, among other things, wipe out rare species. He lost the battle and the project was carried out, but in time the DNR stopped using the technique in streams.

Becker was also an outspoken opponent of unchecked population grown and fought the use of nuclear power for energy.

Among his many admirers is Mike Dombeck, a former student and chief of the U.S. Forest Service in the 1990s. “Immersed in Washington, D.C.’s political landscape, I often quietly wondered what George would do,” Dombeck recalled. “Even in his later years, he kept in touch, cheering me on during conservation wins as did the entire Becker family, and encouraging me when I was down. I was honored to be treated like one of the family.”