“Ride a conservation hobby of your own choice, but keep an open mind about the other fellow.” — Gordon MacQuarrie 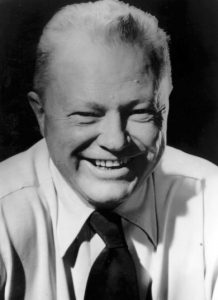 Gordon MacQuarrie, born July 3, 1900, was a native of Superior. Following his graduation from UW-Madison, he became a cub reporter for the Superior Evening Telegram and became its managing editor until he joined the Milwaukee Journal in 1936. Even before 1936, he wrote guest columns for the Journal on outdoor subjects at a time when this was new and unusual.

He penned personal tales of trout and bass fishing, duck and grouse hunting, retrievers, hounds, and the whole spectrum of the outdoors. He authored articles for national outdoor magazines as well as the newspaper, and his collected stories were compiled into books like Stories of the Old Duck Hunters and Other Drivel. MacQuarrie’s contributions were cut short by a fatal heart attack at the age of 56.

The Wisconsin Academy of Sciences, Arts and Letters annually awards the Gordon MacQuarrie Award in his memory for “distinguished contribution to and achievement in environmental communication.”