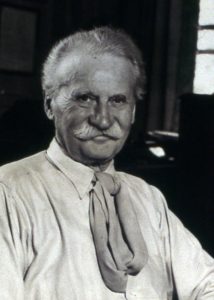 “Unlike other landscape architects of the period, Jensen was not content to create works of art for society’s elite. Instead, Jensen was concerned with improving the American environment in general and thereby improving its people and culture.” – William H. Tishler

“Just as important as his land conservation work was his earnest and passionate promotion of native plants for gardens and landscapes.” – Michael J. Schneider

Danish-born Jens Jensen was a landscape architect and a tireless advocate for conservation of our natural heritage. Aesthetics, in his work, always came second to protecting nature. Through his vocation and avocation, his aim was to bring people and nature together. Upon his death, the New York Times called him “Dean of American Landscape Architecture.”

Jensen began working for the City of Chicago in the 1880s, rising through the ranks from park laborer to the position of superintendent and landscape architect of the city’s Western Parks District. He was instrumental in developing a plan for parks throughout Chicago and in establishing the Cook County Forest Preserve, a collection of dozens of wetlands, forests, and prairies throughout greater Chicago. Well ahead of his time, Jensen was one of the first landscape architects to incorporate native plants into his designs, along with paying significant interest to a location’s topography and geographic features.

Jensen also developed a successful private design practice in the Chicago area, designing gardens and estates for many wealthy clients. Jensen became well-connected with Chicago’s cultural elite through his work for the city and with his private practice. He also became increasingly prominent as an advocate for protecting wild areas, both those remaining within urban areas and others across the countryside.

Jensen was a persistent proponent for national parks, forest preserves, state parks, state forests, scenic areas, county parks, and sanctuaries with notable successes in Wisconsin, Illinois, Minnesota and Florida. In 1913 he initiated Friends of Our Native Landscape, recruiting members and support from his society friends and connections. Aldo Leopold was a prominent member of the Wisconsin Chapter. The Friends was the first significant private organization in the Midwest dedicated to conservation. One of the first efforts of this group was helping establish protection of Indiana Dunes National Lakeshore along the southern shore of Lake Michigan.

After 1920 when his city position was eliminated, Jensen’s work revolved around his private practice. Significantly, he also started spending time vacationing in Door County, Wisconsin. Jensen lived full-time in Door County from 1935 until his death in 1951. Here he zealously continued his advocacy for protection of natural areas. He was a principal proponent of The Ridges Sanctuary, Cave Point County Park, Whitefish Dunes State Park, and Ellison Bay Bluff County Park among others.

One of Jensen’s many legacies is The Clearing, a folk school established on his Door County property in 1935 with the aim of immersing people in nature for “spiritual renewal.” Initially intended for landscape architect students, he expanded its scope to include the general public. Thousands have attended short courses at The Clearing, now a non-profit school, where Jensen’s philosophy of working with nature is the pervasive theme.