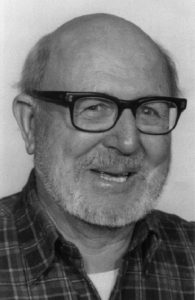 “There is no wall between man and the environment. We are one.” — LeRoy Lintereur

Born in Two Rivers, LeRoy Lintereur spent much of his personal and professional life protecting the places and things he knew best — the natural resources and wetlands of northeastern Wisconsin.

After serving in the army during World War II, he graduated from UW-Madison with a degree in Biology and Wildlife Ecology.

In 1952 he began his 30-year career as a game manager/warden with the Wisconsin Conservation Department, first in Burlington and finally in Marinette. As the area game manager with the WDNR in Marinette, Oconto, Shawano, Florence and Menomonie counties, he used his many skills to enforce resource laws, acquire and protect critical wildlife and plant habitat, and educate sportsman, farmers, land owners, and the public.

As a superb naturalist and gifted teacher/writer, he shared his love of nature by leading ecological walks and tours, teaching classes at schools, colleges and The Clearing, and writing more than 700 articles for local newspapers.

He was instrumental in drafting the Marinette County Shoreland Zoning Ordinance Number 24in 1967 which defined a wetland as an “area where groundwater is at or near the surface much of the year and where any segment of plant cover is deemed an aquatic according to N.C. Fassett’s Manual of Aquatic Plants.”

He received state and national recognition for his efforts as an expert witness to defend and objectively classify wetlands according to this definition in a legal case that went to the Wisconsin Supreme Court. The outcome of this court action established precedent-setting case law for Wisconsin, and ultimately preserved many wetland areas in Wisconsin.