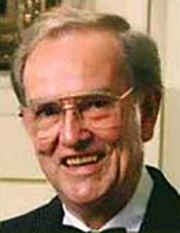 Russsell Wilber Peterson having earned a doctorate in chemistry from the University of Wisconsin-Madison in 1942, and took a position with the DuPont chemical company. For over 26 years Peterson held prominent jobs in research, manufacturing and sales, and finally in corporate management, becoming an executive.

As governor of Delaware, one of his major accomplishments as governor was to lead the effort to adopt a Coastal Zone Act. This sweeping legislation prohibited all new development of heavy industry in a two-mile wide, 115-mile-long zone that covered the shores of Delaware Bay, the Atlantic coast and bays on the leeward side of Delaware’s barrier islands in the south.

From 1973 to 1976 Peterson served as chair of the President’s Council on Environmental Quality(CEQ) he was instrumental in assuring that the Environmental Impact Statement process was implemented, fending off efforts in the Nixon and Ford administrations to prevent implementation of the process. In 1974 Peterson, as chair of CEQ, organized and co-chaired a federal task force to study the claim that chlorofluorocarbons (CFCs) used in aerosol sprays and as refrigerants were a threat to the ozone layer When the task force’s report was issued, Peterson called for regulations outlawing the use of CFCs in aerosol sprays and for research to find substitutes for use in refrigerants. Twelve months later, the world community adopted a timeline for phasing out production of CFCs.

His work at CEQ was lauded by many, including former Staff Director Steven Jellinek, who said: “…your courage, your eloquence and your determination to keep the big picture in view provided both inspiration and motivation to the broader environmental community across the nation.”

As president of the National Audubon Society from 1979 to 1985), Peterson led efforts to expand Audubon’s scientific and educational capabilities. He strengthened the group’s work on influencing environmental decisions and broadened its wildlife protection program.

As chairman of the Center on the Long-Term Biological Consequences of Nuclear War, Peterson worked with Carl Sagan, Paul Ehrlich and Peter Raven to recruit prominent scientists around the world to inform world leaders and the public about the environmental threat of nuclear weapons.
Peterson was also president of the International Council for Bird Preservation , and has served as a principal officer in three international environmental organizations and as an ongoing participant in numerous activities of the United Nations.

The League of Conservation Voters gave Peterson its Lifetime Achievement Award in 1995 and said this of him: “Ever the scientist and always the humanist, you have woven these twin passions into a lifetime of dedication to protecting this earth. Whatever the job, whatever the administration, you have put the environment ahead of politics, supporting pro-environmentalists wherever you have found them.”

The National Wildlife Federation gave Peterson its Conservationist of the Year Award in 1994. The Federation’s president and chief executive officer, Jay Hair, saluted Peterson’s “remarkable, unstinting, courageous and insightful contribution to environmental protection around the world.”

The Wilderness Society bestowed its highest honor, The Robert Marshall Award, on Peterson in 1984. The group said of Peterson: “Renaissance man – scientist, scholar, statesman, educator, public servant, author, esteemed colleague: yours has been an extraordinary and profound contribution toward protecting and enhancing the environment of our nation and our world, follow, in your own words, a ‘one world’ vision – so essential to the preservation of this fragile planet.”

Former President Jimmy Carter reflected on Peterson’s career in a speech at the University of Delaware in 1993: “Every time something wonderful has happened when I was president and since then in the field of environmental quality in this country or on a global basis, Russ Peterson has been intimately involved in it.”