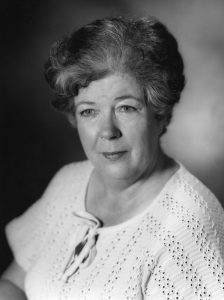 “We speak dry words at times, but if one has eyes to see and the mind to perceive that what we are working for is the quality of our environment in this and the next generation, one cannot but feel a quickening of the senses.” — Ruth Clusen

Ruth Clusen’s activities in local, state and national realms came at a time when women were just beginning to move into positions of prominence. Clusen was president of the National League of Women Voters from 1974-78. While President, Clusen worked to assure the passage of the 1974 Safe Drinking Water Act.

During her presidency, the League promoted a common-sense conservation measure including recycling and educating communities about source separation of solid waste. The League also worked to educate the public and offer opportunities to participate in the political dialogue on issues like conservation and the environment.