“Scott Craven is an ambassador for Wisconsin’s wildlife, with a gift for sharing his knowledge and enthusiasm for Wisconsin’s natural resources. Scott’s legacy is in the number of people he has introduced to the ‘wonderful world of wildlife.’…With his historical knowledge, nearly four decades of experience, a well-developed network of colleagues, Scott is the quintessential wildlife figure in Wisconsin.” —  Dr Scott Hygnstrom, Dr David Drake and Jamie Nack 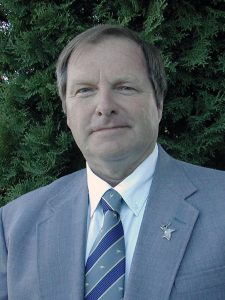 Scott Craven is an ambassador for Wisconsin’s wildlife, with a gift for sharing his knowledge and enthusiasm about Wisconsin’s natural resources. As a popular UW-Madison Wildlife Professor, he reached hundreds of thousands through his UW-Extension presentations, publications and programs on wildlife, natural resources and the land ethic.

He also found a niche in public education through public radio and other prominent media outlets.  As a gifted speaker, he has a unique way of captivating his audience with facts, stories and humor.

Scott has provided service and leadership to hundreds of agencies and organizations, and to thousands of private home and land owners, through his selfless contributions of time and effort. As a leader in Wildlife Damage Management, he has helped educate the public on how to attract wildlife and how to thoughtfully deal with nuisance wildlife and wildlife damage.

Craven was born in Manchester, New Hampshire in 1948. After receiving his BS degree in Zoology in 1970, he taught high school biology for two years. His time in Wisconsin started in 1972 as a graduate student at the University of Wisconsin-Madison in the Department of Wildlife Ecology. Finding a niche, his association with UW-Madison has continued for more than 40 years as a Professor, UW-Extension Wildlife and 4-H Specialist, and Department Chair.

He was an advisor and mentor to hundreds of undergraduate and graduate students through classes, internships and independent study projects. He also advanced Youth Education in Wisconsin through his 4-H leadership efforts and his Hunter Education and Shooting Sports programs.

As one of Wisconsin’s most influential Extension Specialists, he used a variety of tools to reach Wisconsin citizens and to further the Wisconsin Idea, including UW-Extension bulletins, public lectures and workshops, and mass media, including newspaper, television and his ever-popular public radio programs. He was also a prolific author, writing or co-authoring over 60 technical, 30 popular and 25 peer-reviewed research publications.

When Scott began his career, wildlife damage control/management was not recognized as a key issue. His sustained work in this new area helped to educate the public and to build support for his programs while also cementing his reputation as a leader in the field, both in Wisconsin and nationally.

Scott also recognized that private landowners played an important role in advancing wildlife conservation. During his career he has worked with 1000’s of them to improve wildlife habitat on their properties. In 1994 he developed the very successful Wisconsin Coverts Project, reaching thousands of landowners who together manage over 500,000 acres statewide.

Scott Craven has been one of the most influential UW-Extension Specialists and conservation educators in Wisconsin in the last half century. Since his retirement he has continued to be a committed conservationist and prolific ambassador for wildlife through lecturing and writing, leading field trips, serving on advisory committees and non-profit organization boards, and his regular guest appearances on public radio.

Known and respected in virtually every corner of the State, Scott Craven has received prestigious awards for his contributions to conservation from many organizations, agencies and universities including the Pound Award from the University of Wisconsin, the Wisconsin Award from the Wildlife Society, and the 2017 Youth Development Hall of Fame Award from Wisconsin 4-H. As well as others from UW- Madison, UW-Extension, USDA -Wildlife Services and the Wildlife Management Institute.