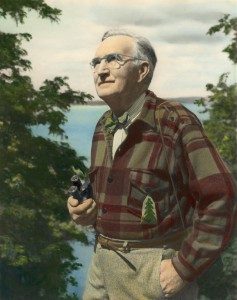 The kind-faced gentleman pictured here was an early genius in mass media. Wakelin McNeel, “Ranger Mac,” reached an estimated 700,000 young people in Wisconsin with his Wisconsin Public Radio program, “Afield With Ranger Mac.” The program ran between 1933-54, reaching out to students in one-room school houses and big city schools alike with colorful but knowledge-filled messages about conservation and nature. The mere mention of “Ranger Mac” evokes warm memories among those who looked forward to his program each week.

McNeel described his preference for using non-technical language to teach children about the environment this way: “Statistics are dull. Kids prefer down-to-earth realism. Every creature has some place in the scheme of nature, from the angleworm that buries in the ground to the hawk that swings at anchor in the sky.”

Children loved the program, but its influence was also well understood by adults and the broadcast industry. It received the prestigious Peabody Award for broadcast excellence in 1942.

It was fitting that devotion to the outdoors and conservation emerged in McNeel’s own youth. He spent his childhood canoeing, fishing, hunting, and camping in his birthplace of Kilbourn (now Wisconsin Dells). McNeel graduated from Lawrence College in 1906 and went to work as a teacher and administrator at Black River Falls High School in Tomah. He attended the renowned Biltmore Forestry School in Michigan. He taught science to students in the education curriculum at Whitewater Normal School before being named superintendent of the Fort Atkinson School District in 1912. During the final year of World War I, McNeel went to France to work with the YMCA in coordinating athletic activities for soldiers.

Upon his return, McNeel was employed by Marathon County 4-H to promote youth nature activities. Later, the University of Wisconsin-Madison hired McNeel as a professor of agriculture and a forestry extension agent. Working in these capacities, McNeel swiftly began to focus on conservation education, and launched Afield with Ranger Mac in 1933. He had a hand in helping Wisconsin to develop an elementary school conservation curriculum, and fashioned the radio program around that curriculum requirement.

He took children on field trips, and was influential in the establishment of Upham Woods, a 4-H environmental education camp in the Wisconsin Dells. The center was created in 1941, after McNeel secured the Upham family’s donation of a 300-acre plot of land.

When McNeel retired in 1950, he dedicated himself to the camp’s development, and now the nationally acclaimed Camp Upham Woods is attended by 10,000 youths each year. The camp is a quiet refuge in the heavily developed Dells tourism area. McNeel’s dedication to conservation in Wisconsin earned him numerous accolades throughout his lifetime. Most notably, McNeel was inducted into the Wisconsin Forestry Hall of Fame in 1995 and the National 4-H Hall of Fame in 2002.

Many years after his program has come and gone, the memories linger for those who loved it. AWisconsin State Journal article on McNeel in 2002 evoked an outpouring of memories from readers. Among them was noted Wisconsin rural life author Jerry Apps, who wrote: “As a Waushara County farm kid attending a one-room county school back in the 1940s, I listened to Ranger Mac’s programs each week. We all did. You’d think as country kids we knew about nature and the outdoors; we did to a point. But Ranger Mac added to what we knew in an interesting ‘you’ve got to keep listening’ way. He ranks right up there with Aldo Leopold, John Muir, and other Wisconsin environmental heroes.”