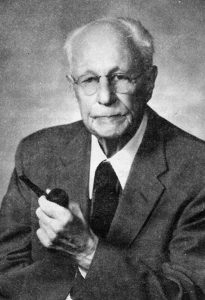 A. D. Sutherland graduated from Harvard in 1917 and practiced law in his hometown of Fond du Lac most of his life. However, his involvement with legal cases and legislation dealing with conservation extended statewide and beyond.

During the 1920s he became active in the Izaak Walton league and held several league offices including state president, national director, vice-president and honorary national president. He was instrumental in securing legislation creating the national Soil Bank Program and the State Public Hunting Grounds Program as well as bills and court decisions protecting State waters from pollution. Eldorado Marsh, Horicon Marsh and Kettle Moraine State Forest were among the acquisitions he championed.

Among his many honors were the national Nash Conservation Award, received in 1954. He also wrote an acclaimed book, Sixty Years Afield and Observations on Conservation.