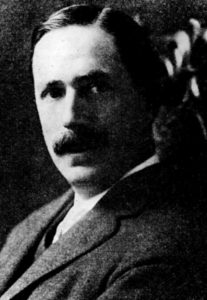 “The whole system of forest taxation is wrong, for it puts a premium on forest destruction” – Edward M Griffith

Wisconsin enacted its first comprehensive forestry law in 1903. This law provided for a forestry commission with power to appoint a State Forester whose professional qualifications required certification by the U.S. Secretary of Agriculture. E.M. Griffith became Wisconsin’s first state forester to begin a decade of service to progressive Wisconsin forestry. Griffith embarked upon a series of programs including control of forest fires, acquisition of land for the Forest Reserves, conveyance of federal lands to the state and protection of the headwaters of the streams flowing into the Mississippi River and Lake Superior.

Griffith received the Wisconsin Forestry Hall of Fame Award in 1984 in recognition of ten years of service as Wisconsin’s first state forester.

Edward Merriam Griffith was appointed Wisconsin’s first state forester on his 32nd birthday, February 8, 1904. A native of Brooklyn, NY, Griffith entered Yale with the class of 1895 as an engineering student. He left Yale during his senior year to study forestry in Germany because at the time there was no school of forestry in the US. In 1898, the Department of Agriculture Chief of Forestry, Gifford Pinochot, hired Griffith to promote the concept of management in the national forests. Under Pinochot’s direction, Griffith lead special assignments to study forest conditions in the Hawaiian Islands, the Philippines, Japan, India, Australia and Germany.

Wisconsin enacted its first comprehensive forestry law in 1903. This law provided for a Forestry Commission with power to appoint a State Forester. After being appointed state forester, Griffith embarked upon a series of programs including the control of forest fires, acquisition of land for the Forest Reserves, conveyance of federal lands to the state and protection of the headwaters of the streams flowing into the Mississippi and Lake Superior. Griffith demonstrated his foresight in environmental issues as well. He repeatedly stressed the influences that forests had upon the water of the state with stream flow stabilization, retarding of snowmelt in the spring and ground water replenishment. He also conducted educational programs at the University of Wisconsin – Madison towards the advancement of forestry.

During the years between 1911-1915, Griffith added an additional 183,000 acres of forest to the Forest Reserves and approved the establishment of the first state plantation.
While Griffith was continuing his efforts at building and funding a statewide forestry program, opposition from educators, the lumbering interests and northern legislators grew to challenge him and his programs. In 1915, a critical Legislative Committee report and ultimately a Supreme Court decision ruled against state forestry laws. Because of this, Wisconsin laws regarding forestry and use of state funds to purchase forest reserve lands were declared illegal. This legislation halted all of Griffith’s programs except fire prevention and control.

After ten years of dedicated service, Griffith left Wisconsin to spend the remainder of his days in Connecticut and Florida, where he died at the age of 67.

In 1921, a joint resolution for the adoption of a forest amendment to the constitution cleared the legislature. It limited the appropriation for forestry in any one year to the identical rate Griffith had ventured to seek in 1909. On September 14, 1948, D.C. Everest, the then President of Marathon Corporation and later president of the American Forestry Association, noted Griffith in his “Review of Forestry in Wisconsin” address. He remarked that Griffith was advocating a program for the perpetuation of forests back in 1909, but due to lack of vision in the men of that time, Griffith was literally, “run out of the state.”