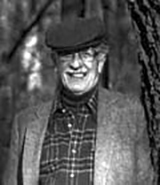 “To manage land wisely requires knowledge from a myriad of disciplines.” – Harold Jordahl

What a ride it has been for Harold C. “Bud” Jordahl. He has helped to shape some of the most influential state and national policies in the history of the conservation movement and has seen them implemented to the benefit of all. The jaunty gentleman from Madison and Richland County has sure left a mark over the past five decades.

Working with Gaylord Nelson (inducted 1986), first in state government when Nelson was governor, then in the federal government while Nelson served as a U.S. senator, Jordahl was called upon to put pen to paper on new and innovative conservation policies.

The 1961 Wisconsin Outdoor Recreation Act Program, which spurred capital investment to set aside and enhance natural areas and parks across the state. As director of the Department of Resource (DNR) Development under Gov. Nelson, they worked together to create ORAP. It was the forerunner of today’s Nelson-Knowles Stewardship Act, the state’s program for preserving sensitive and important natural areas. He and Nelson also worked in the early 1960s to keep Wisconsin’s county forests part of the public forest system.

Later, as a regional coordinator for the U.S. Department of Interior, Jordahl worked hand-in-hand with Nelson and others to create the Apostle Islands National Lakeshore. The two also combined talents to write the national Wild and Scenic Rivers Act of 1968, which Nelson steered through Congress. Nelson saw to it that the Upper St. Croix and Namekagon rivers in Wisconsin were among the first to receive that designation. It had special meaning for Bud. He courted his wife, Marilyn, on those waters.

How about Earth Day? Yes, Bud was there. He is credited with playing an important role on the national committee named by Nelson that created the first Earth Day, or National Environmental Teach-In, in 1970.

Jordahl went from the halls of government to the world of academia in 1965, taking a position with UW-Madison’s Department of Urban and Regional Planning in 1965. He served on the faculty until 1988, earning professor emeritus status. He always considered himself a teacher first. He served on the Natural Resources Board from 1972-76, and as chair for two years.

Groups like 1000 Friends of Wisconsin, which advocates wise land use, and Gathering Waters, a statewide land trust group, benefitted from having Jordahl among their founders. He has practiced what he preaches, too, donating his 220-acre farm site in Richland County to Gathering Waters under a conservation easement.

Jordahl remains active in a variety of conservation causes today. He’s also a repository for information about the history of conservation in Wisconsin and the colorful characters who have had a hand in protecting and enhancing this state’s natural resources. Of course, he’s one of them.