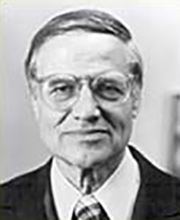 Henry S. Reuss practiced law in Milwaukee for a time and then entered the U.S. Army as a private in January 1943, and served in the European Theatre until his discharge in January 1946. After a brief stint at banking at Marshall and Ilsley Bank in Milwaukee, Reuss entered politics, and in 1954, he won Wisconsin’s 5th Congressional District seat to begin a nearly 30-year run as U.S. Representative.

Reuss, known in Congress for his grasp of economics and international finance, gained prominence as Chairman of the House Banking Committee. He was one of the first authors of legislation that would become the United States Peace Corps, and an ardent proponent of civil rights and environmental conservation. His legacy in Wisconsin, the nation and beyond includes rich chapters on his environmental accomplishments in both protection from pollution and preservation of natural assets.

Starting in the mid-1960s, Reuss, chaired the House Subcommittee on Conservation and Natural Resources. “The subcommittee became a real tiger…,” he recalled.

In 1971, the subcommittee held hearings on the Department of Agriculture’s Soil Conservation Service, to stop stream channelization. Pushed by Reuss, the committee held regional hearings across the country to put the spotlight on problems caused by channelization. The SCS abandoned the program in the early 1970s.

The committee also brought about one of the earliest attacks on water pollution in the country. In the early 1970s, committee staff found the Refuse Act of 1899 which provided that anyone who introduced a pollutant into any lake or stream, whether navigable or not, without obtaining a permit from the Army Corps of Engineers, was subject to a fine. Reuss tested the statute in 1971 in his home state, where a federal attorney for the Western Districts successfully brought action against four major polluters.

In 1999, Reuss wrote “Perhaps the most salutary effect of discovering the Refuse Act was that enforcing it soon convinced industry to stop fighting federal antipollution legislation and instead accept the reasonable federal regulatory system created by the Clean Water Act of 1972.”

Reuss was quick to hand out credit for Wisconsin’s Ice Age Trail to others, especially Wisconsin Conservation Hall of Fame inductee Ray Zillmer, who first approached Reuss in 1958 with an idea of creating a national park, to be called the Wisconsin Glacier National Park to preserve the evidence of the last great glacier – eskers, kames and other topographical features. Reuss wrote legislation to create a federal reserve of the Ice Age Trail area. The bill became law in 1964. In 1980, Congress designated the trail a National Scenic Trail, on a par with the Appalachian and Pacific Crest National Scenic Trails. Reuss served on the trail foundation board and wrote a booklet about it, called “On the Trail of the Ice Age.”

Reuss was interested in sustainable city life. His Subcommittee on the City had no power to create legislation, but it did work to outline new ideas for America’s urban areas. In his 1977 book, “To Save a City,” he pointed out that urban sprawl wasted energy in transportation, heat loss and other areas. “The country cannot afford more urban sprawl,” he wrote, adding: “The role of the city as the Great Conservator of land, energy and resources can be enhanced by city planning to encourage…walking, bicycling or short community distance of workplaces, shopping and recreation.” He advocated mass transit, bus service and restrictions on automobile use in the central districts. In the late 1970s, he sponsored a “Small is Beautiful” exposition in Milwaukee.

After retiring, Reuss remained active in a variety of causes. He was a founding director of Green Empowerment, a group that promotes “community-based green energy projects to generate social and environmental progress.”

In an appreciation of Reuss at the time of his death, economist James K. Galbraith wrote, “ Henry Reuss’s monuments, apart from the Ice Age Trail, are not mainly physical. They are social, institutional, historic:…He was a lawyer, a legislator, an environmentalist, urbanist, economist, statesman, a visionary, and a guerrilla.”