“Each time I come here, I marvel at the children’s faces and their excitement. This is the magic of Schlitz Audubon Nature Center – being able to touch the lives of so many young people. Through nature, we are nurturing tomorrow’s conservationists. It is my dream come true.” — Dorothy Vallier 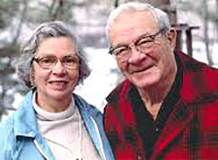 Dorothy and Jacque Vallier were giving spirits who shared a delight for nature, making them a team of conservation philanthropists among Wisconsin’s most notable. Their generous contributions to the preservation of Wisconsin’s natural resources and to increase awareness of the state’s natural history will continue to benefit Wisconsin for years to come.

Born in 1910, Dorothy spent summers of her youth at her grandfather, Schlitz Brewery Founder Henry Uihlein’s Milwaukee River home. There, the beauty surrounding her piqued her interest in nature and led her to become involved in the Audubon Society, for which she served as a junior member and during her adulthood as a Director on the National Board.

Jacque (1912-1996), who majored in botany at UW-Madison and later earned his Master’s Degree from the University of Iowa, worked as a cook’s helper or “bull cook” in a relic of a logging camp in the Wisconsin northwoods during his youth. It was there that he “captured a love of wild things, and of wilderness that never left.”

Dorothy and Jacque’s early enchantment with the natural world never left them, Each was a generous contributor to nature preservation before they married. Dorothy worked in prairie chicken preservation, eventually helping to found the still-active Society of Tympanuchus Cupido Pinnatus (prairie chickens). Jacque created a logging camp replica at Keshena Falls which he donated to the Menominee Indian Tribe.

When the two became a pair, they combined their efforts and personalities to give magnificently to the state of Wisconsin. One of their most remarkable efforts was the donation of the tract of forest land, known as Treehaven, to the University of Wisconsin-Stevens Point. Dorothy and her first husband, Gordon Kummer, started Treehaven as a 600-acre tree farm dedicated to the preservation of the mixed hardwood forest near Tomahawk, Wisconsin and eventually was expanded to 1200 acres. After Kummer’s death and Dorothy’s marriage to Jacque, in 1977 the Valliers contacted William Sylvester, a forestry specialist on the natural resources faculty at UW-Stevens Point, to make plans to donate Treehaven to the university. The land came to host one of the nation’s leading natural resources education and professional development facilities, cherished by people who visit from all over Wisconsin Later, the Valliers provided funding for the Dorothy and Jacques Vallier Chair of Ecology in the College of Natural Resources at the University of Wisconsin-Stevens Point.

The Valliers also joined forces to create the Schlitz Audubon Center in Milwaukee, Wisconsin. The land where the center is located is where Dorothy’s devotion to nature began: the place of her grandfather’s summer home in the Milwaukee area. Dorothy was determined beginning in the 1960s to thwart the Schlitz Foundation’s plans to develop the region, proposing as an alternative that the land remain pristine and be used as an Audubon Society nature center. Dorothy’s persistent efforts and Dorothy and Jaques’ financial support resulted in the creation of the Center in 1974, where it hosts more children than any other Wisconsin Nature Center and more than any other Audubon center in the United States.

Undeniably, the Valliers made enduring contributions to the state of Wisconsin before they became partners, as did Dorothy’s first husband, Gordon Kummer. But the Valliers’ legacies will live on together – they were groundbreaking in their generosity to Wisconsin conservation, and it was together that they left their most dramatic impact on the state’s resources and people.

For more information read their Hall of Fame monograph.

“Vallier’s life marked by love of nature, conservation efforts” by Mark Johnson of the Journal Sentinel