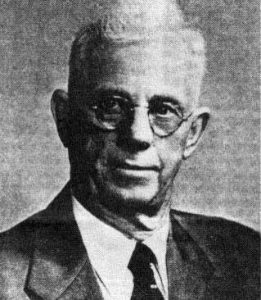 “Erosion damage is so general and increasing so rapidly that mild controls will not be adequate… we need to strive for maximum controls.” – Zeasman

Before the Soil Conservation Service started, there was Otto “Zeas” Reinhart Zeasman. An agricultural engineering professor and friend of the farmer, Zeasman was deeply concerned about soil erosion. He designed erosion control structures that were widely adopted throughout the United States.

His initial efforts addressed 20-50 foot gullies in Western Wisconsin. He supervised construction of gully control dams on 50 farms and terracing for 200 farms in several counties. Zeas logged a decade of extensive erosion control work before the Soil Conservation Service (SCS) was created in 1934. SCS promoted  his proven practices of terracing, diversions and crop rotation as standards.

His whole-farm watershed protection approach in the Coon Valley was designated as the U.S. Department of Agriculture’s Watershed Demonstration Project No. 1 for the nation.

Born in Kiev, Russia, Zeasman’s family settled in Marathon County when he was two years old. He completed his bachelor’s degree at the University of Wisconsin in 1914, then became a soils instructor and Extension specialist in land drainage. Tile drainage was the topic of the first of his many publications.

While serving as agriculture agent for Green Lake County, he developed alfalfa-growing methods well suited for sandy soils. He returned to the university and taught agricultural engineering and soils for 35 years. When Civilian Conservation Corps camps were started in 1933, he helped supervise nine camps. Zeasman also served as state drainage engineer or assistant engineer from 1930 until retiring in 1956.

Beginning in 1936 and continuing for 20 years, Zeasman was the soil conservationist jointly for SCS and University Extension. He promoted erosion control methods which remain keys to curbing soil loss and runoff, such as contour strip farming and grassed waterways. He also continued to publish bulletins and pioneer demonstration projects. By introducing aerial soil conservation tours in 1951, he gave 5,000 landowners a bird’s eye view of erosion problems and potential solutions.

Even in retirement, Zeas actively worked to promote soil conservation. He was a technical consultant to a committee rewriting the State’s drainage statutes.

Known as “Mr. Soil Conservation in Wisconsin,” Zeasman was a close personal friend and counselor to many farm families. His love of the land and dedication to preserving it were an inspiration to many.