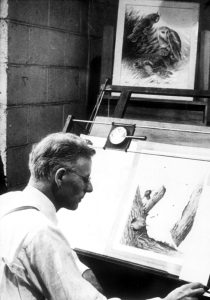 “He is a phenomenal man and outstanding artist; there is no question in anyone’s mind that Owen Gromme is one of the greatest wildlife painters of all time.” – Ken McCreary

Known as the “dean of U.S. wildlife artists,” Gromme was a native of Fond du Lac, Wisconsin. He spent most of his professional life as the curator of birds and mammals at the Milwaukee public Museum. Gromme’s reputation as a painter of wildlife enabled him to bring attention and action to important conservation issues such as legislation to protect birds, the protection of the Horicon Marsh, and the formation of the International Crane Foundation. Gromme served as president of the Wetlands for Wildlife organization and was among the first to crusade against the use of chemicals.

The quote above is from former Ducks Unlimited Executive Secretary Ken McCreary. It could just as well have been spoken by thousands of Gromme admirers across the state of Wisconsin and the country. Gromme is credited with being the “dean of U.S. wildlife artists.” He was prolific yet demanding of himself. He spent 20 years working on his book, Birds of Wisconsin, a pictorial representation of all birds known to live in Wisconsin.

A native of Fond du Lac, Gromme spent his childhood in the marshes and forest of east-central Wisconsin, surrounded by abundant wildlife. His first professional job was as a taxidermist at the Field Museum of Natural History in Chicago. Later, after serving in World War I, he went to work at the Milwaukee Public Museum, where he was curator of birds and mammals. He became head of the department and stayed on until retiring in 1965. That set the stage for two more decades of work, for an artist never really retires. Nor does one who is imbued with the conservation ethic, and Gromme was that kind of person. He understood how important conservation education and public support were to the environmental cause.

Gromme was fearless when it came to speaking out about issues, as in the 1930s, when he pushed for a closed season on ducks, bag limits on geese and other environmental legislation. He worked with Aldo Leopold to influence legislation that would protect herons, hawks and owls. His networking and organizing skills were strong. He played an important role in helping to stave off efforts to drain the Horicon Marsh. He was among the founders of the International Crane Foundation in Baraboo.
Gromme was heavily involved in observing and collecting specimens for the museum, and he had a keen eye for noting environmental concerns. He was one of the first to notice the scarcity of birds of prey and warblers, and learned that this was due to chemicals being used to fight Dutch elm disease. Long before Rachel Carson’s Silent Spring, Gromme was crusading against pesticide misuse.