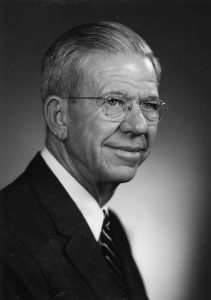 “The fine public acceptance of our gift to the state of the . . . George W. Mead Wildlife Area was an exhilarating experience. . . .  the diversion of these lands to conservation and to propagation of game will make possible their most beneficial use for the people of Wisconsin.”  — Stanton Mead

Stanton W. Mead (1900-1988), the former president and chairman of Consolidated Papers Inc. in Wisconsin Rapids was born in Rockford, Illinois. His early education was in Wisconsin Rapids schools. Leaving the city, he attended Hotchkiss Preparatory School prior to enrollment in Yale University. Following his graduation from Yale in 1922, Mr. Mead began his career in the paper industry when he joined Consolidated Paper, Inc. He was elected a director in 1927 and was in administration as treasurer, vice president, and president at Consolidated papers until his retirement in 1971.

Mead emphasized sustained yields on company managed lands. He encouraged the initiation of an industrial forestry operations program within the company and hired their first forester in 1930. Mead believed that trees used by the company should be replaced, not only as a wise business practice, but also because it was an obligation toward the land and its people.

Throughout his career, Mead took a keen interest in conservation progress in Wisconsin, particularly in the field of forest management. He was instrumental in the founding of Trees for Tomorrow, Inc., a nonprofit organization of Wisconsin paper and power companies dedicated to the advancement of reforestation in Wisconsin. He was a director of this organization for many years

During his years as a paper manufacturer, he gave time and energy to the successful development of the Wisconsin River to control flood waters and secure an even supply of water for power purposes. He served as director and president of Wisconsin Valley Improvement Company, the company which developed the reservoir system on the Wisconsin River, and which regulates the river’s flow.

Mead was active in pollution abatement programs of the former Sulphite Pulp Manufacturers’ research league, an organization of United States pulp mills which was organized to find economic, non-polluting uses for by-products of the sulphite pulping process. He was a trustee of this organization when it was organized in 1939 and served as its president from 1954 to 1965,

He was the motivator for the gift to the State of 20,000 acres of land in central Wisconsin. Now known as the Mead Wildlife Area, this gift came about largely as a result of Mead’s interest in conservation and the enthusiasm he developed for the project when he discovered the potential value of this area to the entire State. His conservation efforts were recognized in 1968 when he received a special conservation award from the State of Wisconsin

Stanton Mead had a great interest in education and youth projects. He served as trustee for Lawrence College and the Institute of Paper Science, and as a director, vice president and treasurer of South Wood County YMCA.

He was a long time leader in the Boy Scouts and President of Samoset Council, Boy Scouts of America from which he was awarded the America Silver Beaver Award. Mead also received the Region 7 Boy Scouts of America Silver Antelope Award for outstanding service to boyhood in the community, state and nation. He was named “Citizen of the Year” by the Wisconsin Rapids Area Chamber of Commerce in 1959 and the Wisconsin Rapids Rotary Club named him a Paul Harris Fellow in 1981. In 1986 he was inducted into the Wisconsin Forestry Hall of Fame.