“Clifford E. Germain created a vision for what became the Wisconsin State Natural Areas Program, which has served as a model to many other states for comprehensive nature preserve protection.  In so doing, he developed the first statewide systematic inventory for natural plant and animal communities.  Under  his two decades of leadership, this Program evolved into the most successful statewide nature preserve system in the nation.”— Thomas Meyer (WDNR) and Signe Holtz (WDNR ret) 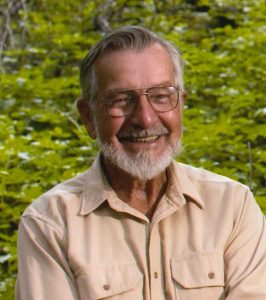 Clifford E. Germain created a vision for what became the Wisconsin State Natural Areas Program, which has served as a model to many other states for comprehensive nature preserve protection. In so doing, he developed the first statewide, systematic inventory for natural plant and animal communities. Under his two decades of leadership, the Wisconsin State Natural Areas Program evolved into the most successful statewide nature preserve system in the nation.

Mr. Germain was born 1923 in Merrill,Wisconsin. With his siblings he learned to love the out-of- doors in the north woods. Apart from his time in the U.S. Army during the 1940s, he has been a lifelong resident of the state, and he devoted his professional career to public service in Wisconsin. He received a BS degree in Zoology in 1949 from the University of Wisconsin-Madison. He was hired by the Wisconsin Conservation Department (WCD), and while serving in a variety of positions in his early years with the WDC, Germain inventoried and purchased thousands of acres of wetlands on behalf of the state, including some that would become State Wildlife Areas.

In 1966 Mr. Germain was the first ecologist hired by the Wisconsin Conservation Department to be the staff person for the State Board for the Preservation of Scientific Areas, now known as the Natural Areas Preservation Council. Mr. Germain began his work as the first Scientific Areas Program ecologist by evaluating the backlog of sites that had been recommended as Scientific Areas. The concept of a county-by-county inventory which Mr. Germain developed to provide structure and organization for what had been an arbitrary approach to assessing and prioritizing natural areas led to the development of inventory protocols. These inventory protocols became a model for other states as they began to develop their own natural area protection programs. The data collected and the analyzed by Mr. Germain and his employees formed the basis of the natural community portion of the Wisconsin Natural Heritage Inventory Database, Wisconsin’s part of a nationwide system that houses information on locations of rare plants, rare animals and natural communities.

As sites were identified and assessed as important for natural area protection, Mr. Germain faced the issue of how to protect them. Many sites were already owned by the state, imbedded within state parks, wildlife areas, and state forests. Mr. Germain proposed scientific area designation for those sites of high ecological quality in these areas. While these proposals were not always warmly received by the programs on whose land they were found, Mr. Germain’s strong advocacy led to the designation of many sites on state-owned properties.

To recognize and preserve high-quality natural areas on lands in private ownership, Mr Germain, in his position as the Scientific Areas Program ecologist, began to work with partner organizations such as The Nature Conservancy (TNC). Working together allowed both programs to be successful over the years. TNC, for example, provided both public support for the DNR’s program as well as financial backing for land acquisition.

High-quality natural areas could, of course, be purchased by the DNR. When Mr.Germain joined the Scientific Areas Program in 1966, there were no funds dedicated specifically to the purchase of natural areas. For years, Mr. Germain lobbied diligently for a budget to buy ecologically sensitive lands that other entities could not – or would not. Finally, in 1972 the DNR received a recurring budget allocation of funds for Scientific Area acquisition from the Wisconsin Outdoor Recreation Act Program. At Mr. Germain’s urging, subsequent funding sources, such as the federal Land and Water Conservation Fund and the Natural Heritage Match Grant Program, provided even greater capital for natural area purchases.

Under Mr. Germain’s guidance, the State Natural Areas program grew with purpose from 48 sites comprising 10,000 acres in 1966 to 211 natural areas totaling more than 50,000 acres upon his retirement after 37 years of service.