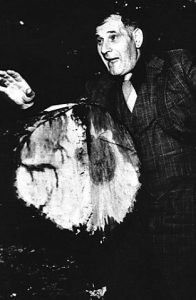 Trenk was inducted into the Wisconsin Forestry Hall of Fame in 1985. Co-developer of the first mechanical tree planter, Trenk encouraged the development of school and community forests and was a leader in tree shelterbelt planting to control wind erosion in the central sand plains. Trenk fostered alternative forest crops such as Christmas trees, maple syrup, and sphagnum moss.

He was a pioneer in encouraging rural zoning and established demonstration forests, representative of farm woodlots.