“(Conservation) involves more than merely combining the factors of production and elimination of waste. It involves the deliberate use of restraint in the present in order to leave a supply for future generations.” — George Wehrwein 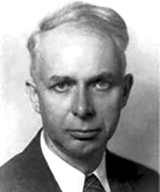 As a professor of Land Economics at the University of Wisconsin – Stevens Point, George Wehrwein advocated wise and efficient use of land. He was also concerned about soil conservation and he deplored the depletion and misuse of this resource.

Wehrwein was the nation’s leading teacher of land economics in the 1920s through 40s. He wrote the first book on the textbook on the subject. Land Economics was published in 1940.

He also worked with state and local officials to find ways to make useful thousand acres of denuded, tax-delinquent land in the north. These efforts led to the establishment of county zoning, the first example of rural land use zoning in the nation. Some forested land was shifted to state and national reserves.