“Forestry is one of the soundest, most progressive and far-seeing policies which Wisconsin can adopt.” — Nils Folke Becker 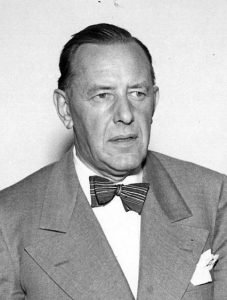 Folke Becker was born in Sweden in 1891 and was educated in Scandinavia and Germany. His father was a well known paper engineer. He came to the U.S. in 1914, became a citizen in 1919 and called northern Wisconsin his home for the rest of his life. Early on, Becker directed his life toward improving the efficiency of paper making and the improvement and perpetuation of the forest resource. To this end he was instrumental in the establishment of Trees for Tomorrow (Trees) in 1944 where a multitude of students are instilled with the conservation ethic to this day. Becker worked closely with “Mully” Taylor, the long-time director of “Trees.” and established the first logger’s apprenticeship training Program.

Becker joined the Rhinelander Paper Co. in 1926 as mill superintendent and served as president of the company from 1935 till his retirement in 1954. During his early years with the company he was a proponent of the Forest Crop Law for public funding of forestry and the County Forest program. In the 1950s, Becker pressed the Conservation Department to establish the position of forest entomologist to support reforestation.

After his retirement, Folke Becker was appointed to the Wisconsin Forestry Advisory Council where he served until 1961. During his tenure on this committee, he helped to shape the forestry program for the remainder of the 20th century. This included the establishment of a center for forestry and watershed research in the Coulee Region. In his obituary, the Rhinelander Daily Newsstated that, “Folke Becker went beyond the expected and helped Wisconsin into a new era, one that saw the reforestation of much of the state and careful management of the resource for many different uses.”