“The ravages of erosion are not confined to destruction of farm land. Human lives, as well as property, are often endangered for hundreds of miles along river valleys by the floods that start with the uncontrollable runoff of drainage water. Hundreds of thousands of tons of silt are annually carried from our farms and dropped in the rivers – there to obstruct navigation and thus make expensive dredging necessary.” – W. Noble Clark 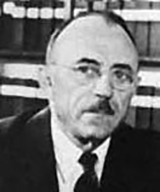 William Noble Clark (1891-1988) was born in South Dakota and grew up on a farm in Minnesota. He was an early pioneer in the area of soil erosion and flood control, and an early advocate of wise land use, especially in rural areas, where he focused his attention. After receiving his bachelor’s degree from the UW-Madison in 1915, he taught and was farm manager at the Michigan State University until he returned to UW-Madison where he completed an MS degree. He spent much of his career in research administration for the College of Agriculture and Life Sciences at the University of Wisconsin-Madison.

First as assistant director, and then as associate director, he participated in the growth of the college’s research program. It grew from 80 scientists when he arrived in 1927, to 250 scientists by the time he retired in 1962. In 1932 Clark was a supervisor of the first land use and wind erosion project in Wisconsin. He was an advisor for the Coon Creek Watershed Demonstration Project and the first Chairman the State Soil Conservation Committee. He served as Chairman of the Association of Land Grant Colleges and Universities’ Committee on Postwar Agricultural Policy and as a member of the President’s Commission on Migratory Labor. With the United Nations, he served as Chairman of the Food and Agricultural Organization (FAO) Mission to Poland during the summer of 1947 and he also served as the first Deputy Director-General of FAO and Acting Director-General until the second Director-General assumed office.

Clarks’s emphasis on soil erosion control and the worldwide problems in food supply, led to his efforts to garner funds for research on soil erosion and then he oversaw the research efforts. The results of early findings about erosion are practices that are being encouraged today in major federal and state conservation programs.

Erosion, he wrote, isn’t confined to destruction of farmland. “Human lives, as well as property, are often endangered for hundreds of miles along river valley by the floods that start with the uncontrollable runoff of drainage water. Hundreds of thousands of tons of silt are annually carried from our farms and dropped in the rivers – there to obstruct navigation and thus make expensive drainage necessary.” Further, Clark wrote, ” . . . erosion is not primarily an engineering problem, but rather one of wise land use.” His message was that it’s better to prevent erosion rather than trying to control it later.

He championed zoning laws that gave counties the authority to designate land uses, again emphasizing the need to prevent farming in unproductive areas that would be costly to both individuals and society as a whole. Along with the likes of Aldo Leopold, Clark championed reforestation efforts across Wisconsin.

The forward to a collection of radio broadcasts that Clark made over state public radio stations included this caveat, “Mr. Clark makes no claim as a prophet, but he does believe the results of present day research will exert far-reaching influence on the agriculture of the coming generation.”