“Don L Johnson was one of Wisconsin’s most talented outdoor writers and conservationists…His work, as a tenacious investigative reporter and as an extraordinary painter of life outside, still matters to anyone who appreciates the outdoors, wildlife and the environment.” —  Dick Ellis 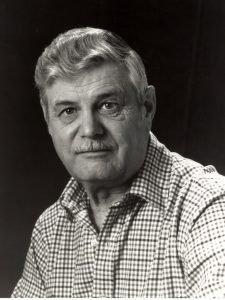 For a period spanning more than four decades, Don L Johnson was one of Wisconsin’s best-known outdoor writers and columnists. He wrote extensively about hunting and fishing in Wisconsin.

But he also tackled complex public policy issues affecting the State’s natural resources including wildlife management, preservation of wildlands and regulation of environmental pollution. He became a major educator of the public during a critical period in the development of conservation advocacy and government regulatory policy.

As a pioneer in environmental journalism, Johnson was responsible for groundbreaking and influential reporting on issues as diverse as the environmental impact of DDT and other chlorinated hydrocarbons, mercury pollution in State waterways, and the harm done to waterfowl by use of lead shot. His work helped Wisconsin become the first state to ban DDT. Weathering threats from industry and those who disagreed, his coverage of controversial issues contributed to positive changes in public policy, with longer-term benefits to Wisconsin’s natural heritage.

Johnson excelled as a conservation minded and classically trained journalist. He was an accomplished photographer, tenacious investigative reporter, and became a much-loved columnist.

His love of nature and the outdoors started during his boyhood on family farms in Buffalo and Dodge county. He joined the U.S. Navy in 1944 at the age of 16 and saw combat service in the Pacific. With an interest in conservation, he attended the University of Wisconsin-Madison and encountered a number of Wisconsin conservation pioneers, including Aldo Leopold, and began writing outdoor articles as a 20-year-old freelancer in 1947. He received his degree in journalism and biology in 1951 and started work at the Eau Claire Leader and Telegram (1951-1962) and then for the Milwaukee Sentinel (1962-1984).

In addition to his work with newspapers, Johnson was widely published as a freelance writer in many outdoor-oriented publications.  He wrote a series of short nature essays in the Sentinel which were published in book form in 2005 as Summer’s Song and Other Essays.

In addition to his journalism, he was an avid outdoorsman and was involved in public education pertaining to outdoor-related activities, promoted a wide-variety of outdoor sports, conducted workshops and clinics, and helped design the State’s first hunter-safety program. Through his writings and service, he also advanced the efforts and mission of many conservation-oriented organizations, including the Wisconsin Conservation Hall of Fame.

For his service and exemplary writing, he received many honors from conservation, environmental and outdoor organizations, including the Gordon MacQuarrie Award, and other awards from the Wisconsin Wildlife Federation, the Wisconsin Natural Resources Board, the EPA, and the Outdoor Writers Association of America.