The WCHF in the Schmeeckle Reserve Visitor Center houses a hands-on museum that interprets the incredible story of conservation in Wisconsin through time. Stop by the visitor center, or take a virtual tour below!

A carved wooden gateway leads visitors into the Conservation History museum in the Schmeeckle Reserve Visitor Center. Wisconsin has sustained cultures for thousands of years. It has lured explorers, enticed miners, and dominated the dreams of lumbermen. Explore this land of wealth. 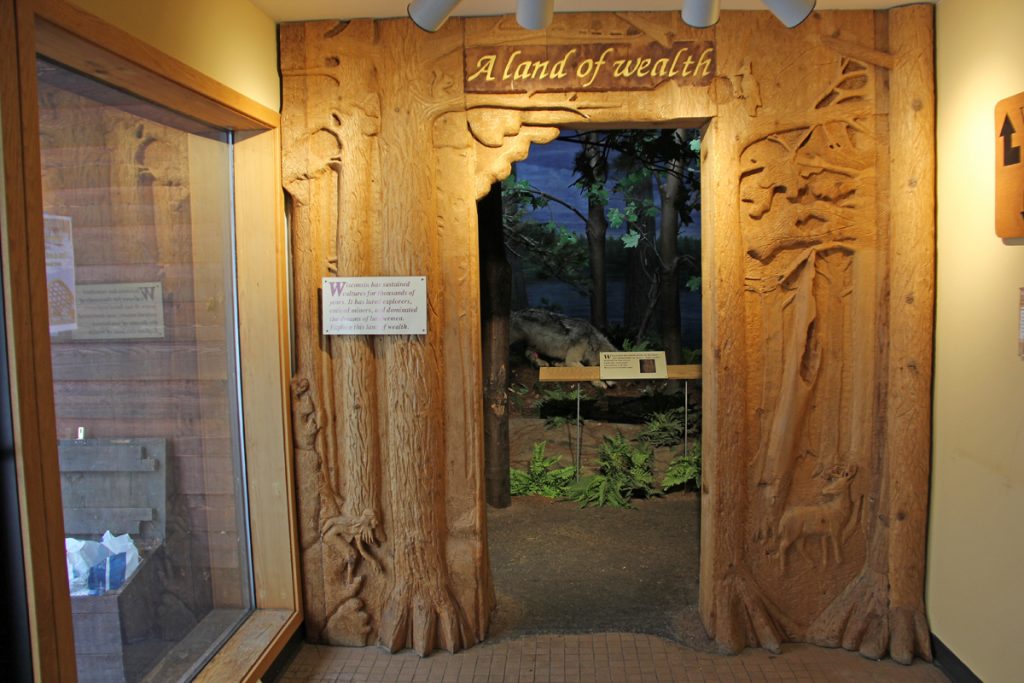 Wisconsin has been home to humans for thousands of years. Lifestyles evolved in harmony with the seasonal abundance of the Wisconsin landscape. A stunning diorama features a wolf to help you imagine what Wisconsin was like prior to European settlement. Press a button to hear how Native Americans lived on the land. 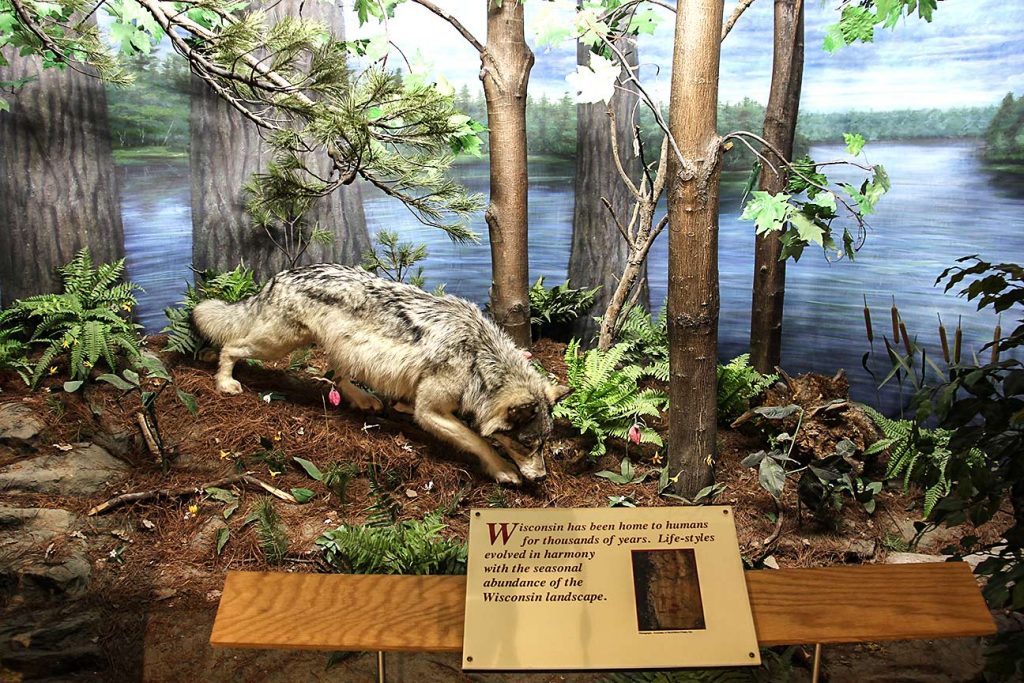 The wealth of the Wisconsin white pine lured men who dreamed of fortunes. Within a lifetime they left behind fire-scarred cutover. Touch a true giant, a 6-foot diameter white pine slice displayed in the 1936 Wisconsin State Fair. 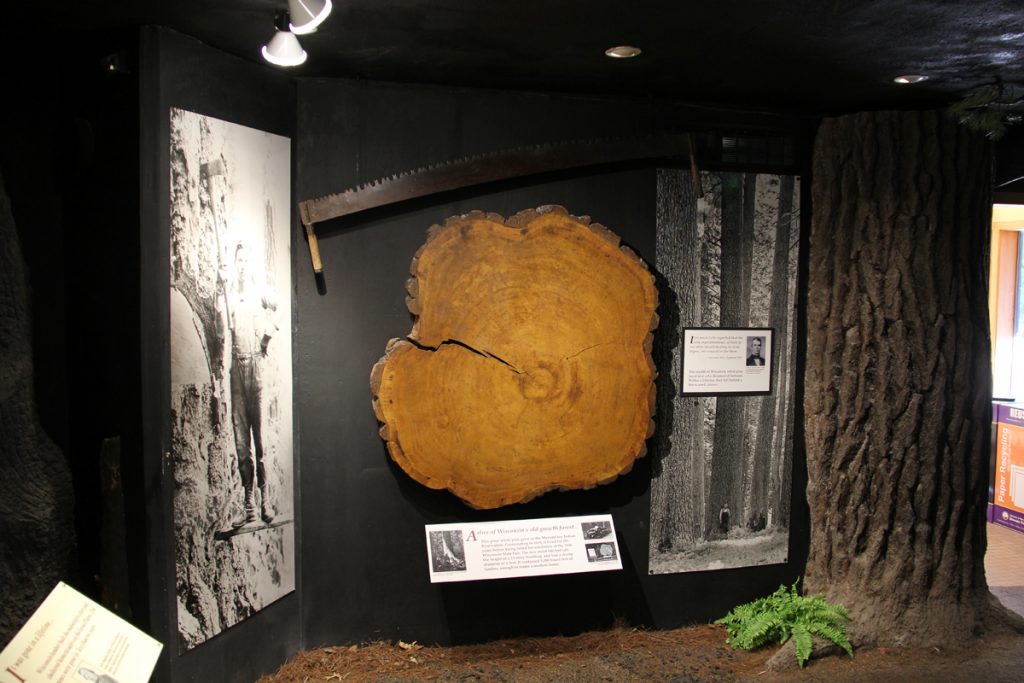 They Were Gone In a Lifetime

It was gone within a lifetime. Wisconsin lumber built the midwestern cities and sheltered homesteaders on the Great Plains. The pines were gone in less than 60 years. Watch for flashes of lighting, listen to the crash of thunder, and witness the burning embers of the cutover forests. 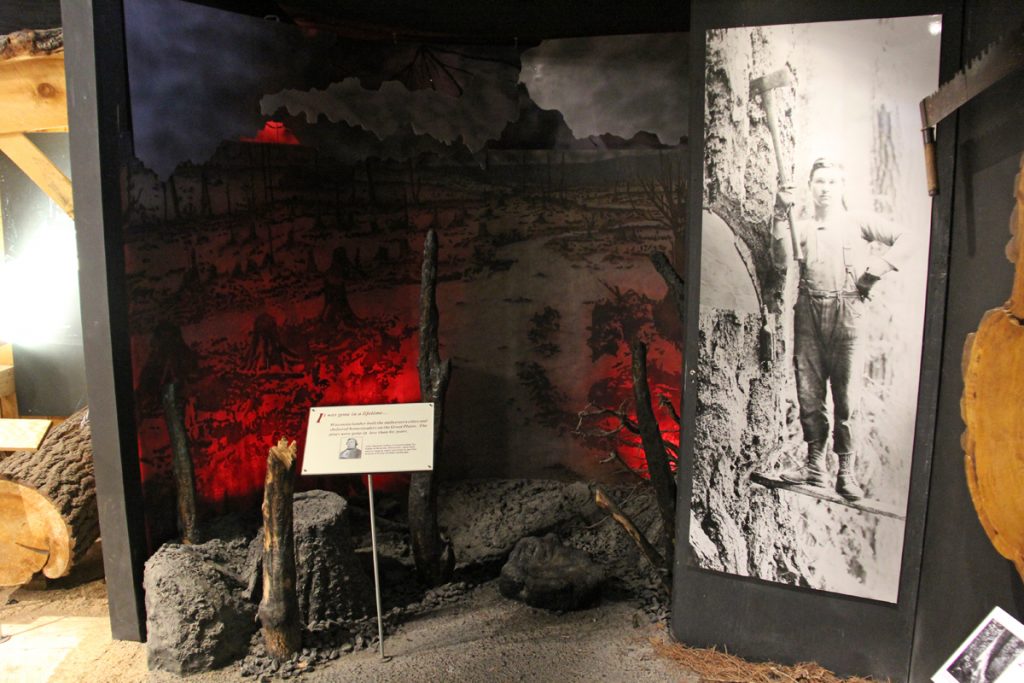 The Plow Follows the Axe

When the pines were gone, hardwoods like oak were cut. Too heavy to float, these logs were hauled by railroads or milled nearby. Many winter lumberjacks were summer farmers. “Cutover” lands were sold for farms by lumber companies or were government homesteads. Watch the ceaseless turning of the sawmill blade that cut massive logs into boards for building. 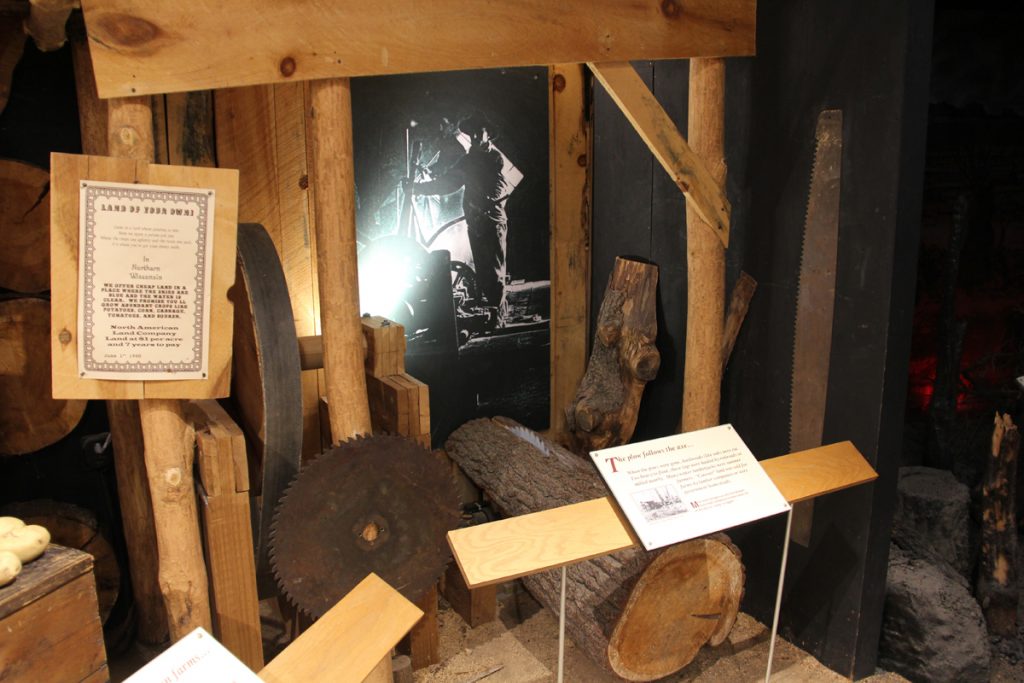 We dreamed of owning our own farms. Immigrants from Northern Europe flooded into Wisconsin where the Handbook for the Homeseeker promised energetic workers bountiful land. Three-fourths of northern Wisconsin became farmland. Most of these farms failed within a few years doomed by short growing seasons and sterile soils. 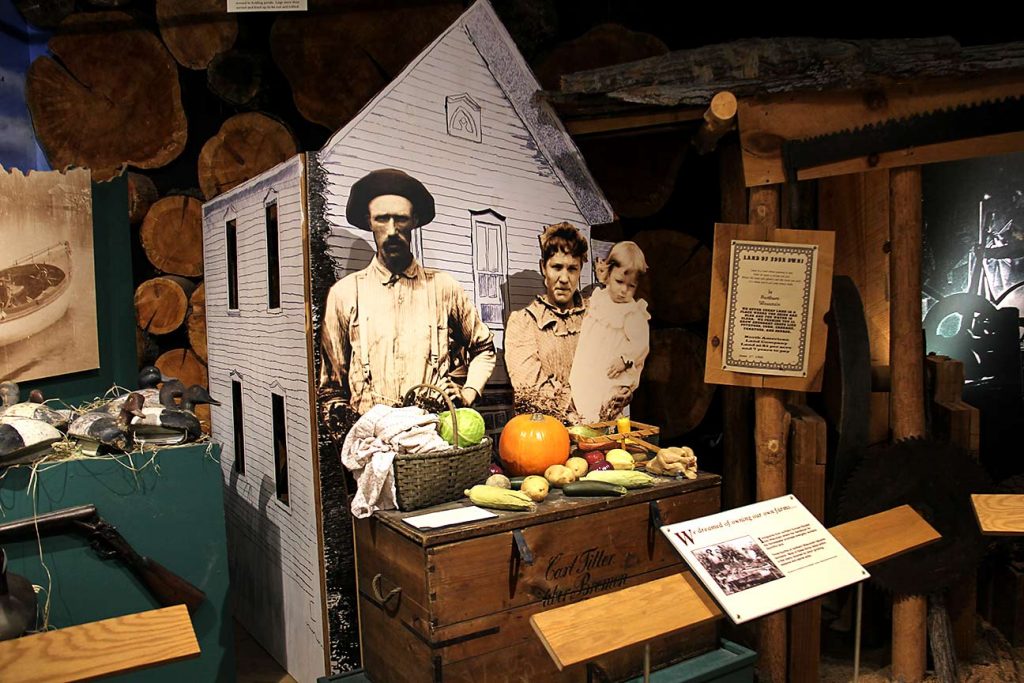 “And the wild ducks when they rise, made a noise like thunder.” (Peter Pond, 1808 fur trader in Columbia County). Market hunters harvested hundreds of waterfowl with blasts of shrapnel from cannon-like “punt” guns. Barrels of salted birds were sent by railroad to eastern cities. View a collection of authentic duck decoy carvings. 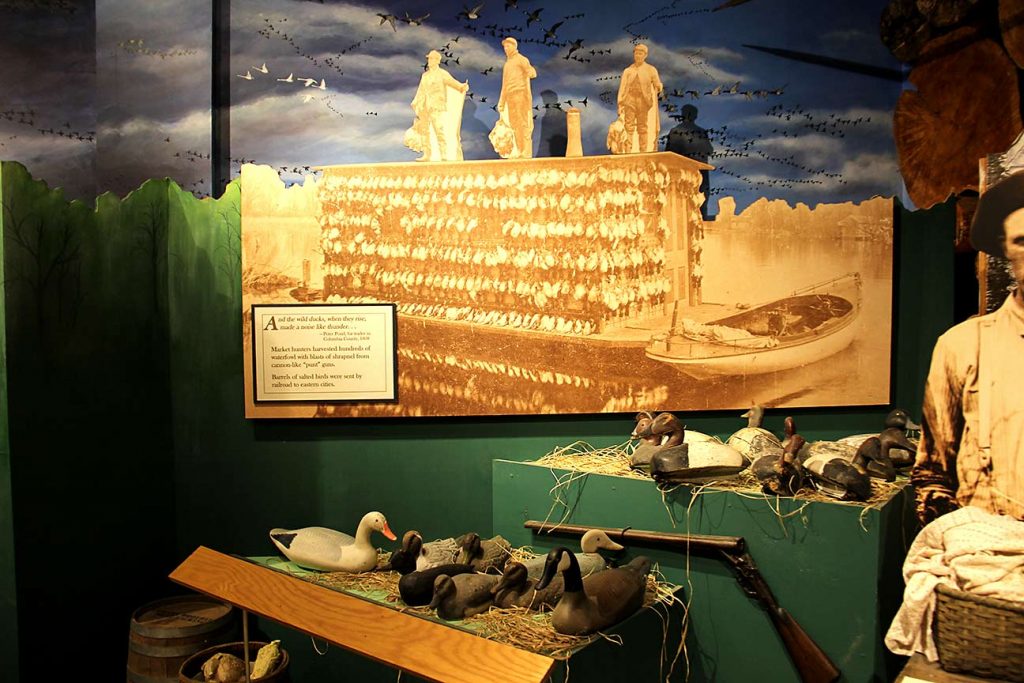 “A mighty river in the sky.” (John Muir’s description of passenger pigeons in 1848). A large nesting of passenger pigeons covered 850 square miles and contained an estimated 136 million breeding birds in Central Wisconsin in 1871. In 1882, 75 barrels each filled with 500 birds were shipped daily to Milwaukee. In six weeks, 15 million birds had been processed. 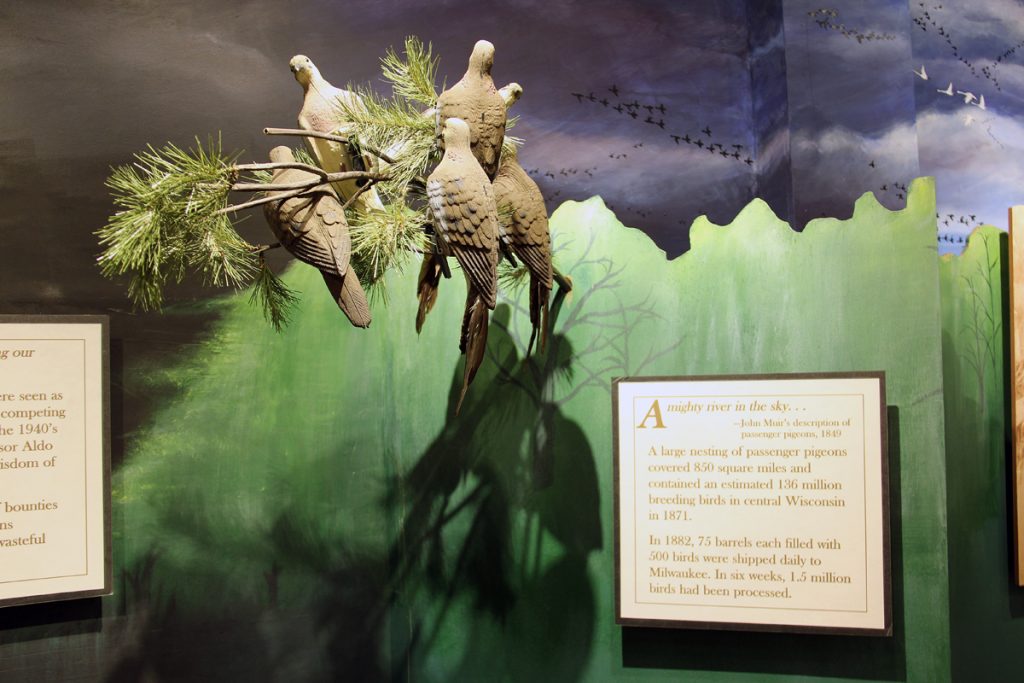 We felt they were killing our deer and livestock. For a century, bounties were seen as a way to rid Wisconsin of competing predators like wolves. In the 1940s people like wildlife professor Aldo Leopold questioned the wisdom of species extermination. In 1960, over a quarter million dollars of bounties were paid and many citizens believed the practice was wasteful and outdated. 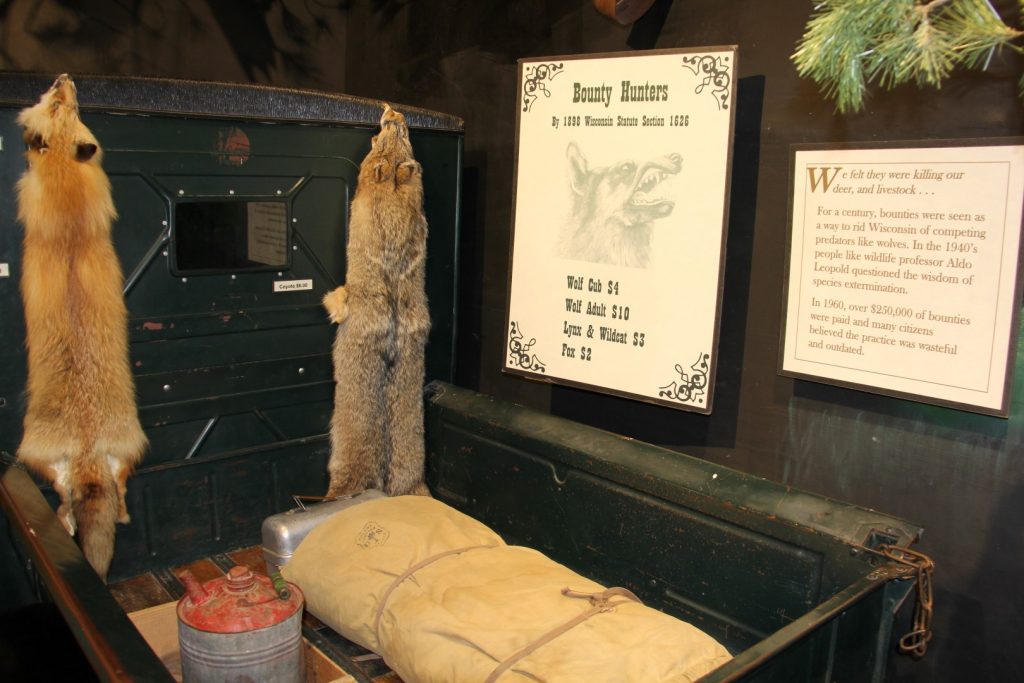 Laws mean nothing without enforcement. Wisconsin wardens date back to 189. The early officers were frustrated by lenient courts and weak fines. By the 1920s 30 game laws were enforced, and violators prosecuted. A warden’s job was often dangerous. Crawl into the seat of a historic warden’s truck and listen to an encounter between a warden and deer poachers. 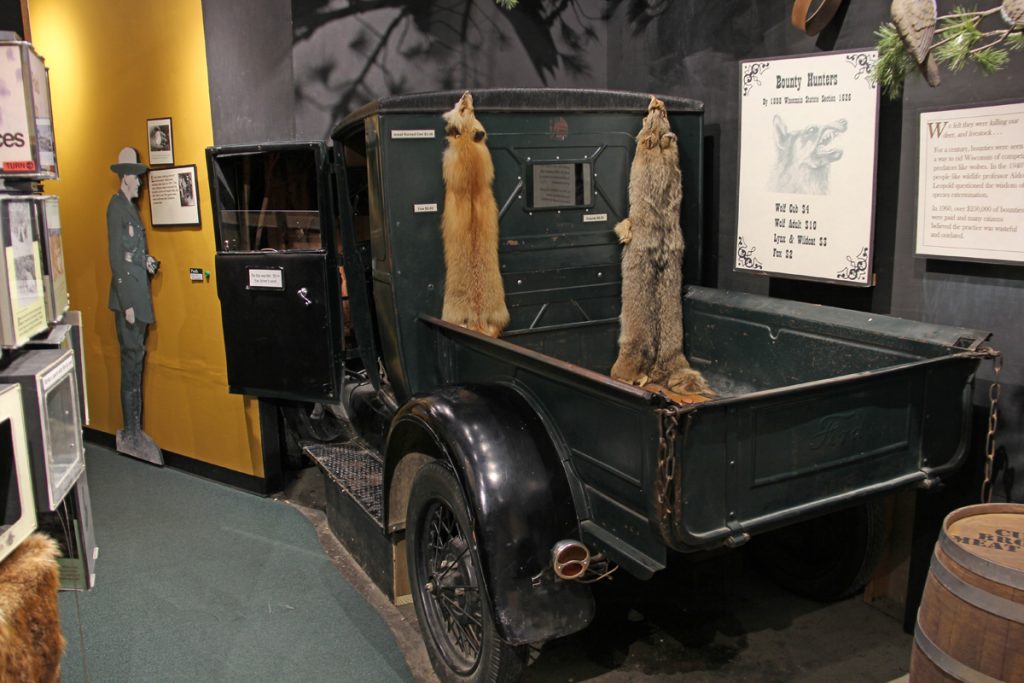 Explore the eras of Wisconsin’s conservation history through an interactive timeline. Rotate boxes to discover interesting facts, feel a beaver pelt, use flint and steel to create a spark, and set a steel trap. 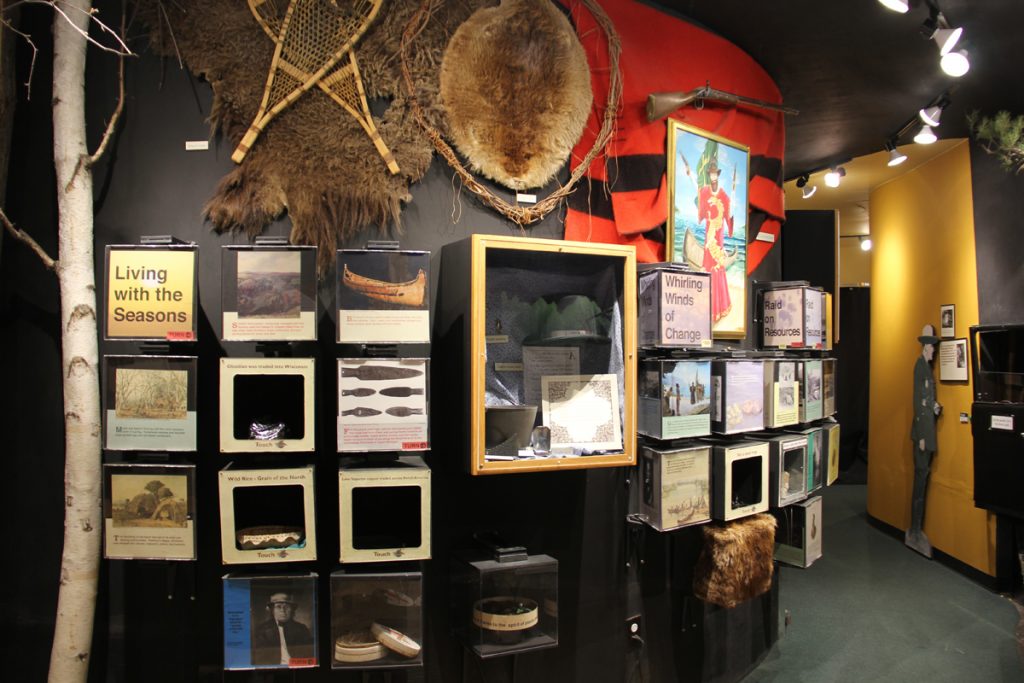 Created by Franklin D. Roosevelt as a public work relief program during the Great Depression of the 1930s, the Civilian Conservation Corps provided jobs for young men throughout the country. They changed the face of conservation through planting trees, controlling erosion, fighting fire, and improving parks and wildlife habitat. Rummage through the trunk of a CCC enrollee named Red, and listen to him tell his story on an old fashioned phone. 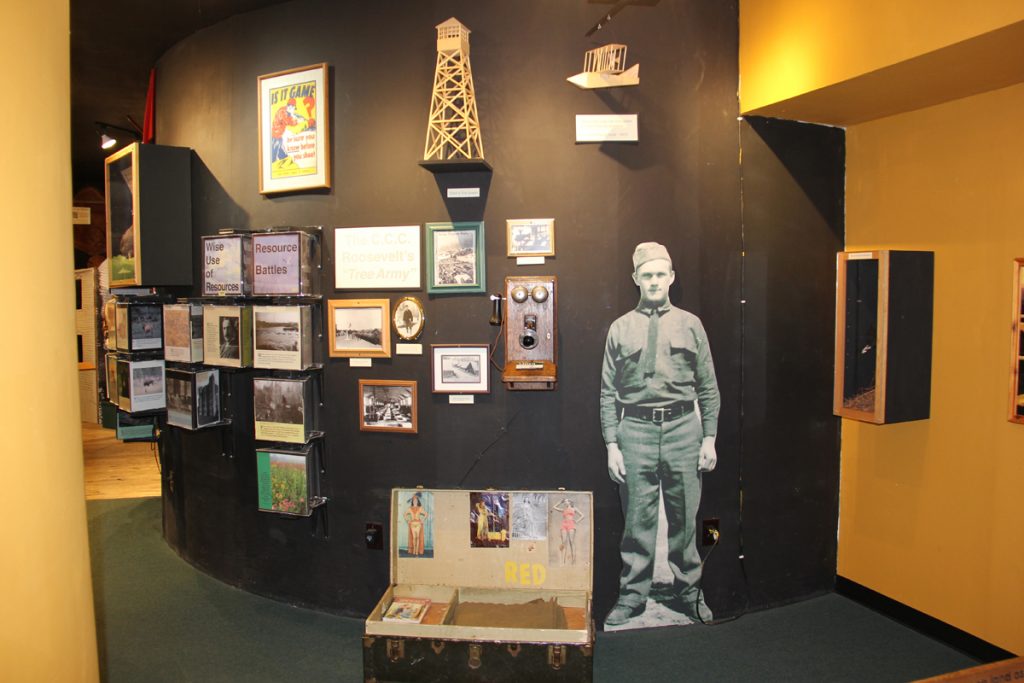 Each Wisconsin Conservation Hall of Fame inductee has a unique story that we can use as inspiration in our own lives. Through interviews and quotes, this video exhibit tells the stories of several inductees who worked together to save Horicon Marsh, the largest freshwater cattail marsh in the country.

Gateway to the Hall of Fame 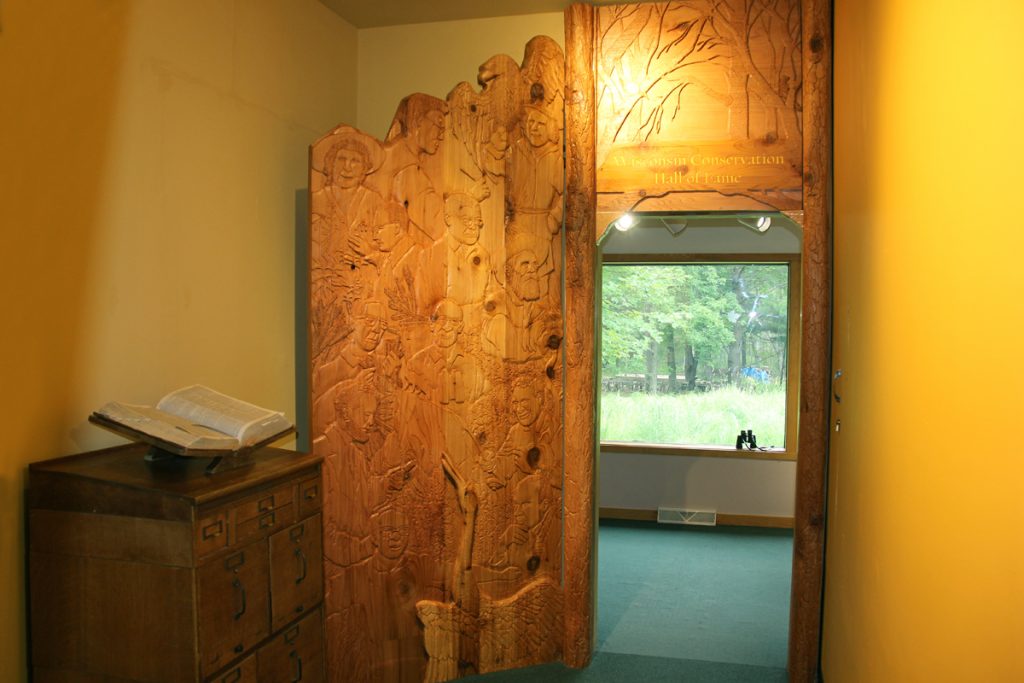 2419 North Point Drive
Stevens Point, Wisconsin 54481
We are part of the Schmeeckle Reserve located on the University of Stevens Point (UWSP) campus.