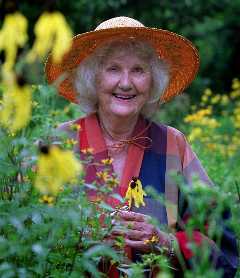 “If suburbia were landscaped with meadows, prairies, thickets or forests, or combinations of these, then the water would sparkle, fish would be good to eat again, birds would sing and human spirits would soar.” – Lorrie Otto

Love of nature and the plants and wildlife it supports led Lorrie Otto on a lifetime mission to protect biological diversity and to fight whatever threatened it.

Otto became concerned in the 1960s about the number of dead birds around her property north of Milwaukee. She noticed robins having convulsions. The cause was DDT, which was widely used to control mosquitoes and the pest that causes Dutch elm disease. Otto’s tenacity brought hearings on the pesticide to Wisconsin. She sought and organized scientists, attorneys and witnesses from the United States, Canada and Sweden to present evidence against DDT. It led to a ban, first in Wisconsin in 1970, and nationwide two years later.

Her first battle on behalf of nature was decades earlier. She had stopped mowing a large area of her front yard in Bayside after noticing rosettes of wildflowers struggling to survive. Without warning, village officials mowed her wildflower meadow. Otto saw an opportunity to address antiquated weed laws that encourage sheared, monotonous landscapes. She gave village officials a tour of her yard, describing each plant that had been destroyed.

When she learned of plans to develop a 20-acre woodland nearby known as Fairy Chasm, Otto worked for 10 years to save this wildlife haven of rare plants. Eventually, she succeeded in bringing it under Nature Conservancy protection. When she learned at a conference that prairie wildflowers and the bird and insect life they supported were at risk of extinction, Otto began encouraging suburban homeowners to maintain biological diversity and wildlife habitat. She taught natural landscaping classes at nature centers, colleges and technical schools, businesses and museums in the Milwaukee area.

After hearing an Otto lecture in 1977, a group of nine women began meeting monthly to share information about natural landscaping. They called themselves the Wild Ones. Otto became their philosophical compass. The organization has chapters throughout North America.

A nationally recognized speaker and author, Otto influenced the re-establishment of native roadsides in areas of Wisconsin. She planted environmental gardens at local schools. She has worked to control foreign invasive plants and whitetail deer, threats to biodiversity and native vegetation in the Milwaukee area. Thanks to Lorrie Otto, hundreds of schools, businesses and private yards across the country are naturally landscaped. The Schlitz Audubon Center’s annual natural yards tour now bears her name.

Click here to go to the Wild Ones home page.  The video Tapestry of Learning features Lorrie.

“Bellingham woman is a warrior against pesticides, an advocate for nature” by Nancy Bartley

“A Fight for the Robins” radio interview. Listen as Lorrie Otto is interviewed by Dick Gordon