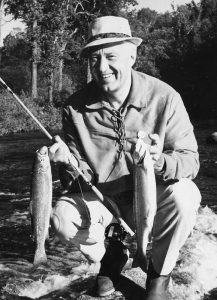 “While I recognize the need for global support for the environment, I have always thought that the slogan ‘Think Globally, Act Locally,’ is an important plan of action for everyone.” – Warren Knowles

Knowles spent his entire life, as governor and in other capacities, supporting conservation. He helped initiate the Outdoor Action Plan and designated money to finance the purchase of land for parks, playgrounds, and green belts. Knowles signed legislation for a $200 million bond issue for cities to develop water treatment programs to reduce pollution to rivers and streams. He served on the Natural Resources Study Commission and was active on the Nature Conservancy Board. Knowles was the 1992 UW-Stevens Point College of Natural Resources environmentalist of the year.