“Bill Horvath is the complete conservation package.  Over his many decades of conservation work, he has been involved with education, training, research, public policy legislation, and leadership with respect to wise use and management of natural resources of Wisconsin and across the nation.”  — Donald Last (UWEX ret) 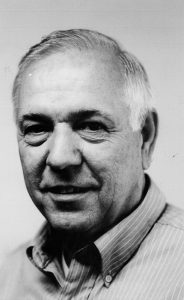 Bill Horvath is the complete conservation package. Over his many decades of conservation work, he has been involved with education, training, research, public policy legislation, and leadership with respect to wise use and management of natural resources of the State of Wisconsin and across the nation.

In 1972 Horvath was hired by the National Association of Conservation Districts (NACD) as the first Midwest Regional Director with responsibility for coordinating the work in conservation districts in eight mid-western states. During the latter part of his time with the NACD, he also served as interim director of the organization’s Conservation Information Technology Center. He retired from the NACD in 2002, and promptly went back under contract to the NACD directing the organization’s forestry programs office. He retired for a second time in 2005.

Active locally as well as nationally, Horvath was elected to the Stevens Point City Council in 1975 and served for ten years, including a term as City Council President. He served briefly in the Wisconsin State Assembly in 1983. He has served on a variety of other university, state and local organizations.

Wherever he has served Bill Horvath has maintained a focus on wise natural resources management causes. While with the Wisconsin Soil and Water Conservation Board, for instance, he initiated a project impact evaluation process which resulted in soil and water public assistance programs shifting emphasis from channelization back to water management on the land.

Early in his tenure with NACD Horvath led the conservation districts in his region into cooperation with the Environmental Protection Agency, to obtain support for dozens of watershed management demonstration projects. Throughout his time with NACD, his leadership in the Midwest Region garnered grants totaling more than fifteen million dollars and many thousands of acres placed under good watershed management.

Horvath’s leadership beyond NACD shows in his efforts to get the National Wildlife Federation, Wildlife Foundation, National Rifle Association and several other organizations to work together to secure the cooperation of private landowners to open their land for private recreation. Recognizing that the biggest obstacles to private landowner cooperation were questions of trespass and liability, Bill organized a study of the problems, which produced a model act that was sent to all states for study and potential passage. Later, when he was in the Wisconsin Assembly, Bill sponsored legislation using ideas based on this model act to modify trespass and liability considerations. It was the first such legislation in the country.

Bill Horvath’s success in implementing creative conservation measures was, in part, because he had broad and deep knowledge of local conservation issues and problems, especially in the Midwest and, indeed, nationally. He used the knowledge and information gained from frequent contact with county-based conservation leaders to make innovative suggestions regarding the design and conduct of programs carried out by state and national resources agencies,

The above is taken from material provided by Dr Milo Harpstead, and Dr. Donald Last.