“It’s only after being aware of what’s around us that we develop an understanding of what nature is like.” –Ruth Hine 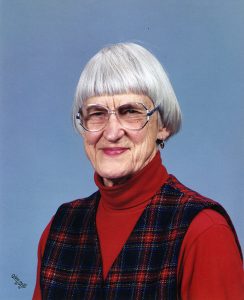 Hine’s work at the DNR left an indelible mark on Wisconsin conservation history. As editor and then chief of the Research and Public Information and Publications Section of the Bureau of Research, she oversaw the technical editing and writing of research reports from 1949-84. She also crossed over to the popular press to pen articles on natural resources topics for magazines and other publications.

It was a male-dominated field when Hine first began her duties. A 1959 Milwaukee Journal article about Hine proclaimed in a headline, “Woman finds place in conservation work.” Many other women found a place, too, thanks in no small part to the excellence of Hine’s work.

Hine told interviewers that her goal was to provide reports that appealed not only to researchers and scientists, but were also valued by administrators, policymakers and the general public.

With her leadership, the DNR undertook annual frog surveys. Frogs, she noted, “were essentially overlooked. We didn’t pay much attention to frogs.” The importance of these amphibians as indicators of ecological health has since become well known.

In her endeavors, Hine was driven by a simple goal: “It was the desire to get more people interested in the outdoors and accept their responsibilities,” she said in a 2009 Conservation Hall of Fame interview.

A Columbus, Ohio, native, she came to Wisconsin in the 1940s, hoping to study under Aldo Leopold at UW-Madison. She was unable to do so, instead earning a graduate degree in zoology and then a Ph.D. in zoology and wildlife management at UW-Madison in 1949. It was the first Ph.D. awarded to a woman by the university.

Cyril Kabot, former chief of research for the then-Conservation Department, gave her the opportunity in 1949 to pursue a career in what had been a man’s world when he hired her as a conservation aide. In her years with the DNR, she helped hundreds of researchers turn out reports. She felt she needed first-hand experience to do that, so she took on roles as leader of mouse and pathology projects, sought rattlesnake dens, and worked on deer counts, waterfowl and prairie chicken bag checks and numerous other activities.

Back at the desk, she gave each manuscript careful attention. “Ruth’s brilliance and modesty as an editor conceal her hard work, generosity and hour upon hour of preparation,” said the late Frances Hamerstrom, another pioneering Wisconsin woman wildlife researcher. “Great editors get little credit in this world. Their gift is drawing others out to coerce them to produce the best that is in them – resulting in a top-notch publication.”

Susi Nehls worked with Hine for 16 years as a DNR research information and publications specialist. “She must have edited over 400 reports, journal articles and bulletins,” Nehls recalled. While most publications were about specific creatures and their management, Nehls noted that Hine saw a need for broader perspective. In response, she created a publication called “Wildlife, People and the Land” in 1961, describing the state’s total natural community and its interrelationships.

As retirement neared, Hine took on a part-time job as a naturalist for Lutheran summer camps in Wisconsin. She also volunteered countless hours at Bethel Horizons environmental camp in Dodgeville, operated by Bethel Lutheran Church in Madison.

In a 1991 interview with the late writer George Vukelic, she talked about how her faith and views of nature were intertwined: “As a Christian, I look upon the world as a magnificent, living organism created by God and sustained by God. Human beings are part of that creation, part of nature, if you will.”