“Mrs Schmitt has called up Senators and Representatives and Governors and alternately pleaded, threatened and heckled. They all respect her. They all know she is a citizen who just asks for the opportunity to give more to her community than she takes from it. That’s why they listen to her.”  —  Gordon MacQuarrie 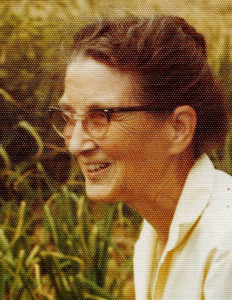 Aroline Schmitt is a good example of how women have been instrumental in leading citizen conservation crusades in Wisconsin and the nation. During the 1940 to the 1960’s, she advanced the principles and practice of sustainable forestry, organized and led new conservation organizations, and worked hand in hand with many other conservation leaders. Despite health challenges, she fought with tenacity and charisma to advance major conservation policies affecting Wisconsin’s natural heritage.

Aroline became a passionate champion for “forest conservation” at both the State and national level. She began her conservation work during World War II in what was then a man’s world, surveying and cruising timber lands for the US Forest Service in Alaska and the west. She continued in various roles with the Forest Service until 1961.

Always promoting the principles of sustainable forestry and timber management, before the practice was known by that name, Aroline prodded politicians, conservationists and industrial foresters to adopt good forestry practices.

Her Wisconsin conservation efforts occurred from the 1930s to the 1960s.  A frequent speaker and advocate for strong resource policy, Schmitt was a prolific letter writer and traveled the State to participate in important meetings and legislative hearings.  She worked arm-in-arm with conservation luminaries including Aldo Leopold, William Aberg and Wilhelmine La Budde. She also helped to organize and lead the Citizens Natural Resources Association and the conservation programs of the Wisconsin Garden Club Federation and their Junior Garden Clubs.

Aroline also played a pivotal role in protecting the Flambeau River State Forest and the Menominee Tribal Forest, as well as in creating the Trees for Tomorrow and the US Forest Service’s Rhinelander Experimental Forest-Northern Research Center.  She was recognized for her exemplary conservation work by the Citizens Natural Resources Association (Silver Acorn Award, 1961), the Wisconsin Garden Club Federation (1956), and the Izaak Walton League (Broughton Award, 1950).

For many years, due to persistent health problems, she fought her conservation battles from her bed and home office. With tenacity and dedication, Schmitt continued to influence conservation policy through her telephone calls, writings, and personal charisma.