In 1980, Bill Horvath, then regional director for the National Association of Conservation Districts, and Dan Trainer, then dean of the University of Wisconsin – Stevens Point (UWSP) College of Natural Resources (CNR), discussed the use of the Pfiffner Building in Buckholt Park in Stevens Point as a Conservation Hall of Fame. They put that idea aside until 1982, when Bill sent a letter to 20 statewide conservation organizations to meet at The Muse restaurant at SentryWorld to explore the idea. Bill proposed that an organization representing statewide organizations be created to annually honor Wisconsin leaders in conservation and to exhibit their accomplishments.

Out of that discussion came the Wisconsin Conservation Hall of Fame Foundation, Inc. (WCHF) with original membership of 16 statewide conservation organizations. Horvath served as acting chair until a set of bylaws was drafted at which time Earl Spangenberg, representing the Wisconsin Chapter of the American Water Resource Association, was elected president. Bill Horvath volunteered to serve as unpaid executive secretary, which he did until 2003, when he retired from the National Association of Conservation Districts. Attorney Bill Murphy, representing the Wisconsin Conservation Congress, secured the incorporation and IRS 501-(c)(3) designation.

Formally, the Hall of Fame Foundation was created to ensure the continuing knowledge and practice of the conservation ethic by engaging in “education, scientific, literary, historical and charitable pursuits which will recognize the principles of the conservation movement.”

Ron Zimmerman took the lead in arranging for land use adjacent to the Visitors Center. Horvath took the lead for fundraising and locating an architect. Stevens Point architect Mike Metcalf agreed to design the building. Bids were let and EB Sommers was selected for general contractor. Ron arranged for help from the Wisconsin Conservation Corps (WCC) and secured a Land and Water Conservation Act grant for outside work. Five workers from the WCC built the building under the guidance of EB Sommers.

Horvath secured the funding needed for the project, the majority of which came from the City of Stevens Point hotel-motel tax fund, with the remainder from a loan from the UWSP Foundation. Following completion of the construction, the General Federation of Women’s Clubs and a few others contributed to the development of the Hall of Fame exhibit area. The Hall of Fame structure remains as originally designed, although the UWSP College of Natural Resources remodeled the meeting room in 2010.

An agreement between UWSP and WCHF recognizes that all exhibits are owned by the WCHF, while the building addition is owned by UWSP, which is also responsible for operation and maintenance. The arrangement has worked very well and satisfies both UWSP and WCHF needs.

The Hall of Fame accomplishes its mission of advancing the conservation ideal by inducting individuals who have contributed significantly to conservation in Wisconsin and in the nation. The first induction ceremony was held in April 1985. Aldo Leopold and John Muir were the first inductees. The policy has been to induct two to three per year from a pool of candidates created by on-going nominations by individual or groups.

To maintain objectivity in selection of inductees, a board of governors was created to recommend inductees to the WCHF Board of Directors, which makes the final decision.  Respected individuals who can review these nominations are appointed for three year terms. Governors have included the likes of former UWSP College of Natural Resources dean Dan Trainer and Bob Ellingson, retired DNR employee.

The 16 member Board of Directors grew to 21 members by the 1980’s. Dues in 1982 were set at $25 and eventually were increased to $100 in 2009. No organization dropped out because of the dues increases. The www.wchf.org web site was developed in 2009 and has become our consistent voice to the world.

Bill Berry, a free-lance writer, and former editor of the Stevens Point Daily Journal had been the primary biographer for the hall of fame. Currently the Board of Governors relies upon the completeness of the nomination package prepared by the nominator. Free lance artist George Gard prepared the line drawings used for the recognition plaques until 2009. At that time, Diane Bywaters, artist and professor in the UWSP College of Fine Arts began preparing the drawings. The plaques are purchased at Point Trophy and laser engraved using the line drawings. 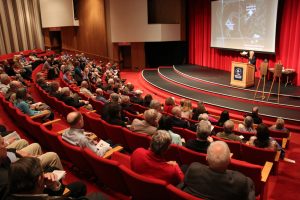 Invitations to attend the annual induction ceremony are sent to nearly 600 selected people, together with a request for a contribution. Many contribute annually enabling the Hall of Fame to publish a newsletter, put on a luncheon in conjunction with the induction ceremony, and pay for operating expenses. While voting membership in the Hall of Fame Foundation is only open to organizations, individuals interested in supporting the foundation can contribute regularly as associate members. Beyond individual contributions, additional grants have been received from the City of Stevens Point, the Alexander Foundation, We Energies Foundation, C.D. Besadny Conservation Fund, a special gift from UWSP CNR Dean Christine Thomas and other contributors over the years.

Many of the inductees or their families have also made contributions of materials, i.e. the pen used to sign the original Wisconsin Outdoor Recreation Act Program (ORAP) bill, books or personal letters like those between Walter Grange and Aldo Leopold, which are maintained at the Schmeeckle Reserve Center.

The Wisconsin Conservation Hall of Fame Foundation was the first such organization in the United States. This is fitting, since Wisconsin has historically been recognized for its environmental leadership – much of which is due to the leadership of those inducted into the Hall of Fame.